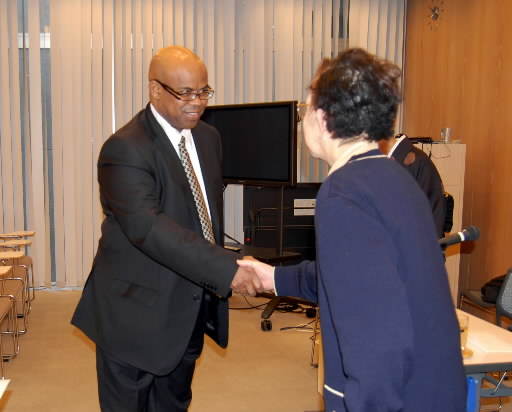 On January 17, Mohamed Siad Doualeh, Ambassador and Permanent Representative of the Permanent Mission of the Republic of Djibouti (in northeastern Africa) to the United Nations Office and other international organizations in Geneva, visited Peace Memorial Museum in downtown Hiroshima and listened to an account of the atomic bombing from an A-bomb survivor. He is visiting Japan at the invitation of the Ministry of Foreign Affairs of Japan and came to Hiroshima at his own request.

Mr. Doualeh toured the museum for about an hour. Guided by Nobuto Sugiura, deputy director of the museum, Mr. Doualeh looked closely at such exhibits as a panoramic model of the former Nakajima District (now, Peace Memorial Park).

Then, at Hiroshima National Peace Memorial Hall for the A-bomb Victims, he met with Shizuko Abe, 83, an A-bomb survivor. Based on her painful experiences receiving treatment for the burns she suffered when the atomic bomb exploded, Ms. Abe said, “I don’t want anyone else to suffer such terrible experiences. Please appeal for nuclear abolition in every nation you visit.” Mr. Doualeh pledged that he would convey his experience of Hiroshima when he returned to Djibouti.