Sculptor pursues collaboration with others in creating Buddhist statues 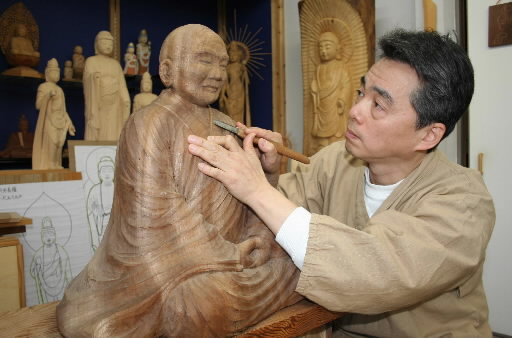 
Chiseling statues with wishes of peace and friendship
Yasufumi Kawashima, 50, a resident of Matsue, Shimane prefecture and a sculptor of Buddhist figures, creates statues by collaborating with others of a kindred spirit that fate has guided his way. This approach to his art was arrived at through his desire to produce works that move people’s hearts. The wooden statues imbued with wishes for peace and friendship are also presented overseas, and have met a positive response.

Mr. Kawashima’s workshop is located at the foot of a mountain on the Shimane peninsula, close to the Ichibata Yakushi Buddhist Temple. Here, he is seen carefully chiseling the finishing touches to another wooden statue.

The statue is a depiction of the priest Honen who founded the temple. The seated figure of Honen will be placed in the temple to coincide with a memorial service next year that will mark the 1,100-year anniversary of Honen’s death. Daiko Iizuka, 50, who runs the temple and commissioned the figure, also joined Mr. Kawashima with a chisel in the process of creating the statue from the beginning.

The collaboration was proposed by Mr. Kawashima. He said, “I believe I’m able to create a work with more heart when I’m joined by those who have been fated to bring the statue to life.” Mr. Iizuka added, “I chiseled at the wood while thinking about Honen as a human being who followed Yakushi, the physician of souls. It was a good experience and I feel it brought me closer to Honen.”


An awakening in Hiroshima
Mr. Kawashima became keenly aware of the heart-stirring aspect of his statues in 2002. He held a solo exhibition of his works in Hiroshima, his first exhibition in the city, as August 6 approached. At the exhibition he saw a woman with tears in her eyes, praying in front of one of his statues.

The statue was a depiction of a man praying in sorrow. When he saw the woman standing before it, he felt the urge to apologize to her for the poor quality of his craftsmanship. “I had worked hard to improve my skill, but that moment made me question whether skill alone was enough,” he recalled. That experience in Hiroshima, where the sorrow of the atomic bombing still lingers, provided the impetus to stop and reflect on the process he pursued to create his statues.

After graduating from high school in Matsue, Mr. Kawashima began working at a bank. He had no particular complaints about the work he performed, but the idea that this would be the only life he lived until he died gnawed at him and led to his decision to quit that job at the age of 25. During subsequent travels that took him across Japan, he felt drawn to the wooden statues he encountered. Then, at the age of 27, he entered the world of sculptors of Buddhist figures. Another turning point came when he met Suzuko Numata, 87, a Hiroshima resident and A-bomb survivor who continues to make efforts to share her account of the atomic bombing.

Introduced by an acquaintance, he met Ms. Numata in the summer of 2007. During this meeting, Ms. Numata held one of Mr. Kawashima’s statues tightly in her hands. The statue depicted a woman, distress on her face, struggling to stand from a crouching position. The statue embodied hope for the future. “Work that is imbued with the creator’s wish provides viewers with hope for living their lives,” Mr. Kawashima said. “If the work is created by a multiple people who share the same wish, I thought it might appeal even more powerfully to people’s hearts.” With this idea, he adopted an artistic process in which statues are created through collaboration.


Statues presented overseas
Two years ago, Mr. Kawashima started presenting his statues created through collaboration to organizations and individuals overseas that are engaged in peace activities. He has chosen Jizo, the Guardian Deity of children, as a motif for these works, believing the endearing expression will be universally loved, regardless of nationality or religion. To date, Mr. Kawashima has given statues to such bodies as the South Korean Atomic Bomb Sufferers Association, the Peace Association of Brazilian A-bomb Survivors, the Carnegie Geophysical Laboratory in the United States, and the New York Buddhist Church. Those who joined the collaboration in helping to chisel were Ms. Numata, who has played a part in all the statues sent overseas, and visitors to exhibitions or products fairs held in the city of Hiroshima.

In this way, Mr. Kawashima hopes a circle of smiles expands out into the world. His style of creating art, through collaboration, has led to the nurturing of that approach as well as his own drive to produce such works.