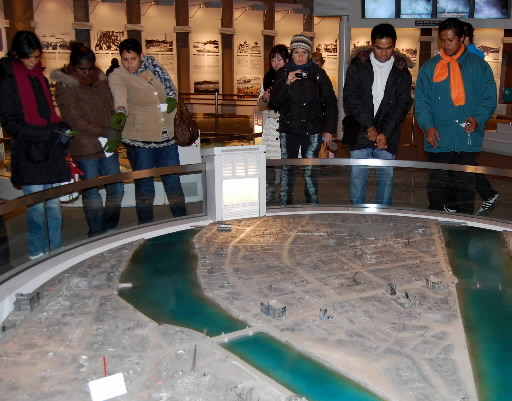 On January 20, a group of five, including former workers involved in nuclear tests conducted in French Polynesia and members from advocacy groups visited Peace Memorial Park in downtown Hiroshima.

The five, who now live in Tahiti in French Polynesia, entered Hiroshima prior to joining the global voyage organized by the NGO Peace Boat. They will board a large ship and leave from the Port of Yokohama on January 23 along with Japanese A-bomb survivors.

The five offered flowers at the Cenotaph for the A-bomb Victims and toured Peace Memorial Museum. They looked closely at such exhibits as a panoramic model of downtown Hiroshima, which depicts the complete devastation near the hypocenter, and panels that describe the A-bomb damage.

Regis Gooding, 56, a former worker at the nuclear test site, stopped in front of a photo of a mushroom cloud that rose as a result of a nuclear test in the Moruroa Atoll and said indignantly that the French government has continued to hide the true effects of the damage from its nuclear tests.

Four members of Australian advocacy groups, including one opposed to uranium mining in Australia, accompanied the group from Tahiti.