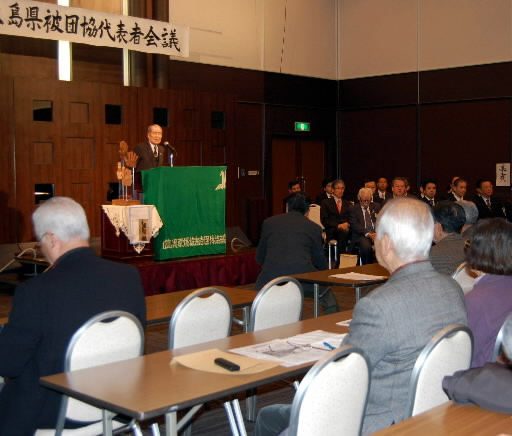 On January 20, a meeting of representatives from 53 A-bomb survivors associations which belong to the Hiroshima Prefectural Confederation of A-bomb Sufferers Organizations, chaired by Sunao Tsuboi, was held in downtown Hiroshima. About 80 people gathered for the meeting.

Mr. Tsuboi encouraged those in attendance, saying, “Let us live another year by taking good care of ourselves.” Mr. Tsuboi also reported that the Japan Confederation of A-and H-Bomb Sufferers Organizations was presented with a special award at “The 2010 World Summit of Nobel Peace Laureates” held last November and showed the trophy for the award.

Mikiso Iwasa, 81, Assistant General Secretary of the Japan Confederation of A-and H-Bomb Sufferers Organizations, called for the enactment of an Atomic Bomb Survivors Aid Law in which the spirit of national compensation for the A-bomb damage will be reflected. “Let us work for the realization of the law,” he said.