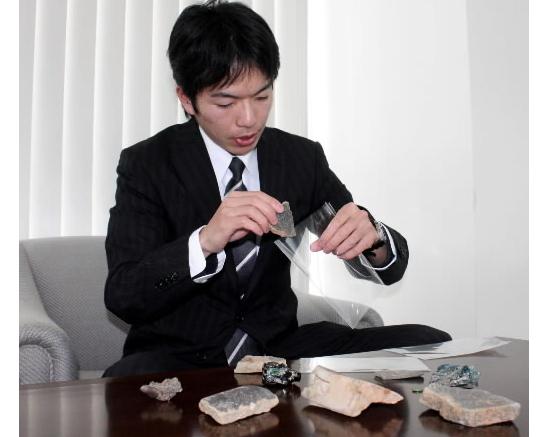 Rebun Kayo, 32, a graduate student at Hiroshima University, has begun an effort to send pieces of roof tiles which were charred in the atomic bombing and retrieved from river beds in the city to universities overseas. The pieces of A-bombed roof tiles, sent to convey the memory of Hiroshima to young people overseas, are imbued with his wish for no more war.

Mr. Kayo is from Okinawa and grew up hearing about the tragedy of war from his grandmother. In his graduate studies he is focused on the Japanese Constitution, which advocates peace.

Mr. Kayo has collected about 100 broken pieces of roof tiles, amounting to about 20 kilograms, from such rivers as the Motoyasu River, which is located by the A-bomb Dome. With the permission of the City of Hiroshima and other entities, he began gathering the tile pieces nearly nine years ago. The pieces he collected have been confirmed as A-bombed artifacts by professors at Hiroshima University and other experts.

The tile pieces are being sent to 19 universities, including Yale University and six other institutions in the United States, as well as universities in such regions as Asia and Africa. These schools provided Hiroshima University with study materials, including books, in the aftermath of World War II when Hiroshima University was in a devastated state due to the bombing. Mr. Kayo is sending each institution a piece that is about 500 grams in weight.

Mr. Kayo is from the city of Urasoe in Okinawa Prefecture. His grandmother shared with him her experience of surviving the Battle of Okinawa. When he was in junior high school, he visited Hiroshima on a school trip and was shocked to see the A-bombed roof tiles that are on display at Peace Memorial Museum.

After becoming a university student in Hiroshima, he began collecting the roof tiles pieces of his own accord. In the beginning, he would present them to international visitors to Hiroshima. Later, he came up with the idea of sending them to universities overseas with the hope that they will help coming generations learn about peace.

Mr. Kayo has received an invitation from Karlsruhe University in Germany, a school to which he sent a tile piece last November, to take part in a peace exchange. “I would like to continue to convey the memory of Hiroshima in my own way,” Mr. Kayo said, “so that this memory will not be forgotten.”