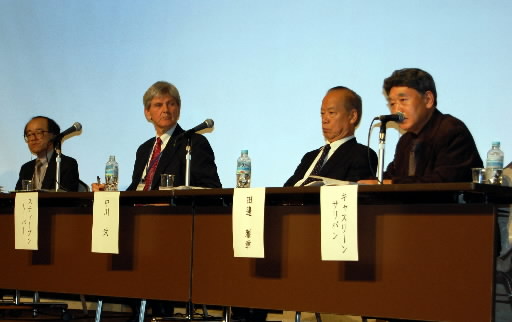 On January 25, a conference bringing together experts from the United States and Japan to discuss the subject of handing down the state of Hiroshima before the city was devastated by the atomic bomb was held at the International Conference Center Hiroshima. The participants reaffirmed the importance of conveying the horrific consequences of the atomic bombing through the use of state-of-the-art technology. The conference was organized by Waseda University’s UNESCO World Heritage Institute and attended by about 150 people.

The discussion at the conference included Masaaki Tanabe, 73, a Hiroshima resident who has created a documentary film in which the appearance of the hypocenter area prior to the atomic bombing was restored via computer animation, and seven experts from Japan and the United States, including those who took part in the making of the film.

Mr. Tanabe, who recently screened his film in the Middle East where he was sent as a “Special Communicator for a World without Nuclear Weapons,” a designation made by the Japanese government, stressed, “I have come to realize that video technology can help contribute to peace in the world.” Mr. Tanabe announced his plans to produce a new documentary film in which he will seek to extend the area of Hiroshima restored via computer animation to a radius of 1 kilometer from the hypocenter. He aims to complete the new film in 2015, the 70th anniversary of the atomic bombing.

Kathleen Sullivan, a consultant to the United Nations Department for Disarmament Affairs who joined the event via video conferencing over the Internet, expressed hope that the combination of footage of A-bomb survivors’ accounts of the bombing and computer animated scenes can serve as a new approach forward for handing down the A-bomb experience.

Michitaka Hirose, a professor at Tokyo University and an expert on virtual reality, pointed out, “By virtue of this technology, whereby a fusion of photos and computer animation can be made, it’s possible to bring a past era to life, as if using a time machine.”

Prior to the discussion, a shortened version of the film "Message from Hiroshima: What was Lost in the Bombing," created by Mr. Tanabe, was screened for the audience. In addition, Nobuyasu Abe, the former U.N. Undersecretary General, addressed the gathering.