DVD about atomic bombing to include foreign language subtitles 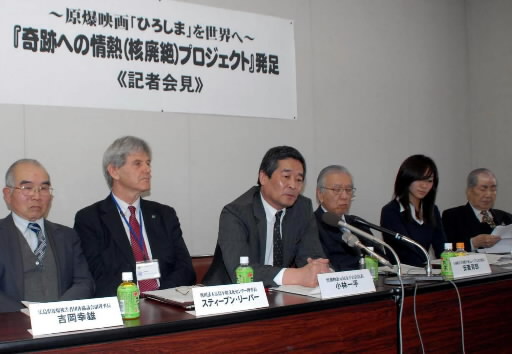 On January 25, a project team composed of those in the film industry and A-bomb survivors was set up to produce a DVD about the atomic bombing with subtitles in foreign languages. The subtitles will be added to the 1953 Japanese film entitled “Hiroshima,” which was directed by Hideo Sekigawa. The members of the project team held a press conference at Hiroshima City Hall and announced that, as a first step, a DVD with English subtitles will be released in July and copies of this DVD will be distributed to state leaders and public institutions internationally.

The Japanese film was based on "Children of the Atomic Bomb," a book of essays by children who experienced the atomic bombing of Hiroshima, compiled by Arata Osada. The film depicts people who suffered burns in the blast struggling to flee in the aftermath and details the agonies of the survivors after their exposure to the bombing. Yumeji Tsukioka, an actress originally from Hiroshima, as well as a total of about 90,000 Hiroshima citizens appeared in the film.

Mr. Kobayashi lost his grandfather to the blast and his late father Taihei served as an assistant director of the film. He screened the film in Hiroshima in 2008, and decided to create the DVD with subtitles in different foreign languages due to a strong response to the film.

Interviews with former crew members of the film and citizens who appeared in the film will be included in the DVD. University students, including Hiroshima natives, will help with the translation. Mr. Kobayashi said keenly, “I would like to share the wish for nuclear abolition with people all over the world.”