Film experts from Japan and the U.S. tour inside of A-bomb Dome 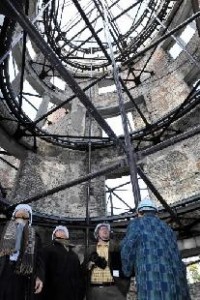 On January 26, three experts from Japan and the United States who took part in a film project which involved restoring the appearance of the hypocenter area prior to the atomic bombing via computer animation toured the inside of the A-bomb Dome.

Eric Hanson, an associate professor at the University of Southern California (USC) School of Cinematic Arts, was among the group of three which took charge of restoring the former appearance of the A-bomb Dome in the film directed by Masaaki Tanabe, 73, the president of a film production company. They came to Hiroshima to attend an international conference held on January 25 which focused on the use of technology in peace building activities. Taking advantage of this occasion, they visited the dome, in part, to gather information for the next film which Mr. Tanabe is set to make.

Guided by a city employee, the three, along with Mr. Tanabe, were escorted onto the grounds of the A-bomb Dome, which are normally closed to the public. They walked around the perimeter of the dome and stepped into the interior, where rubble from the building remains scattered. They also offered flowers at the site of Mr. Tanabe’s old house, which was located next to the dome, to the east, and made a silent prayer.

Mr. Hanson, who has worked on the visual effects for many Hollywood movies, including “Spider-Man,” said his opportunity to see the A-bomb Dome made him keenly aware of the devastating consequences of the atomic bombing.

Related articles
Conference of experts discusses handing down state of Hiroshima prior to the A-bomb via technology (Jan. 27, 2011)
New documentary film in works to restore larger A-bomb hypocenter area (Jan. 19, 2011)