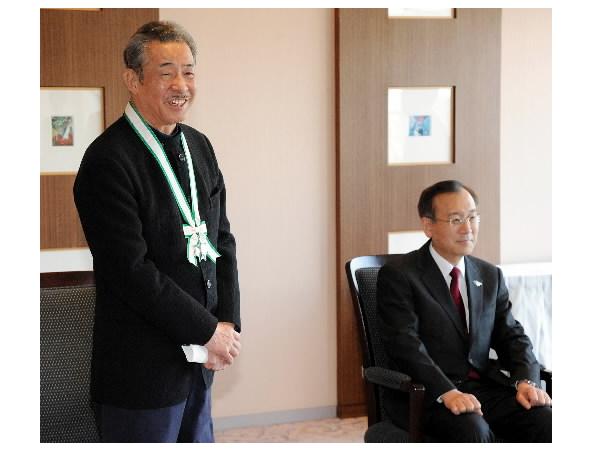 On January 28, the City of Hiroshima held a ceremony at a hotel in Tokyo to present Issey Miyake, 72, a world-renowned fashion designer who was originally from Hiroshima, with the title of “Honorary Citizen of Hiroshima City.”

Hiroshima Mayor Tadatoshi Akiba, who handed the medal for the Honorary Citizen designation to Mr. Miyake, along with other mementos, praised the designer by saying, “The City of Hiroshima is proud of Mr. Miyake’s distinguished achievements, and they will linger as part of the history of Hiroshima for a long time to come.”

In 2009 Mr. Miyake contributed an opinion piece to The New York Times in which he revealed his experience of the atomic bombing and called on U.S. President Barack Obama to pay a visit to Hiroshima. In his remarks in Tokyo, Mr. Miyake expressed gratitude for the honor and said, “My team has made efforts with the hope of conveying our work to the world. In the same vein, the City of Hiroshima has made efforts to convey the aims of peace and freedom to the world. I was able to realize what had been called impossible to do, and I believe it’s due to the fact that I was born in Hiroshima.”

At another award ceremony on the same day, the City of Hiroshima presented Mutsuko Ujihara, 44, a resident of Tokyo and the president of the NPO Gangi-gumi, with the Hiroshima Citizen Award.