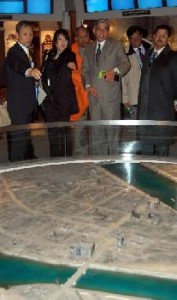 On February 1, Pawan Kumar Bansal, India’s Minister of Parliamentary Affairs, visited Peace Memorial Park in downtown Hiroshima and toured Peace Memorial Museum. He is paying a visit to Japan from January 27 to February 2 as part of a goodwill delegation composed of nine non-partisan members of the Indian parliament. The delegation came to Hiroshima after making stops in Tokyo and Osaka.

Guided by Koichiro Maeda, the director of Peace Memorial Museum, Mr. Bansal and the other members of the delegation looked closely at a panoramic model that depicts the devastated state of the city in the aftermath of the atomic bombing. When the group approached the “Nuclear Globe,” which shows the number of nuclear warheads held by each nuclear weapon state, including India, Mr. Bansal looked away.

Mr. Bansal said that a visit to the museum makes clear the horrific consequences that were faced by the people of Hiroshima as a result of the atomic bombing. Regarding India’s possession of nuclear weapons, he stressed that India is in support of complete nuclear disarmament by all nations and that it has refrained from conducting further nuclear tests.