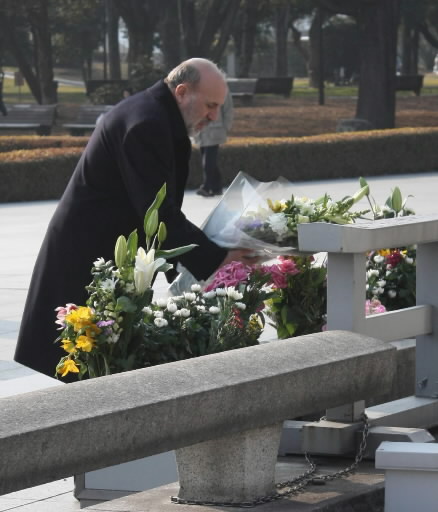 At Peace Memorial Museum, Mr. Daudzai learned about the actual conditions of the A-bomb survivors, who still suffer from the aftereffects of the radiation released in the atomic blast, from Koichiro Maeda, director of the museum. When Mr. Daudzai saw the photo of an A-bomb survivor who was burned by the heat rays of the explosion, he covered his face with his hands. He said that he would like to utilize what he has learned about Hiroshima's history of reconstruction in the reconstruction effort taking place in Afghanistan, which has been plagued by civil war.

Mr. Daudzai, a key member of the Afghan cabinet, is visiting Japan at the invitation of the Ministry of Foreign Affairs of Japan, and came to Hiroshima at his own request.