Gathering on Arata Osada, editor of “Children of the Atomic Bomb,” is held 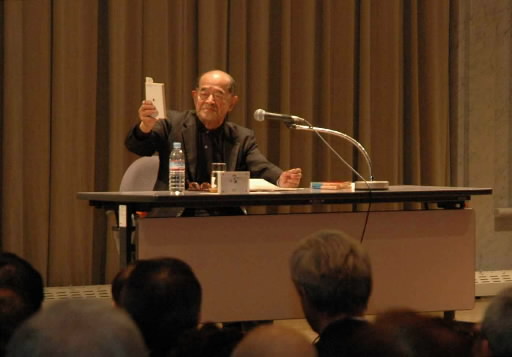 On February 5, a gathering took place at Hiroshima Peace Memorial Museum to reflect on Arata Osada (1887-1961), the former president of Hiroshima University of Literature and Science (now, Hiroshima University) and editor of “Children of the Atomic Bomb,” a collection of essays written by children about their A-bomb experiences. Goro Osada, 84, Mr. Osada’s fourth son and professor emeritus at Yokohama City University, spoke at the event and told those in attendance that he hopes “Children of the Atomic Bomb” will be handed down to the next generation throughout the world.

“Children of the Atomic Bomb” was published in 1951 and was met with a strong response. Goro Osada stressed the significance of the book, saying, “The book reveals to those of the present and of the future what an unprecedented tragedy the atomic bombing was.”

Goro Osada described his father as “liberal, democratic, and pacifist since before the outbreak of World War II,” and said that his father always wore a suit, even during the war. The gathering was organized by Hiroshima Peace Culture Foundation and other entities. About 300 people attended the event.