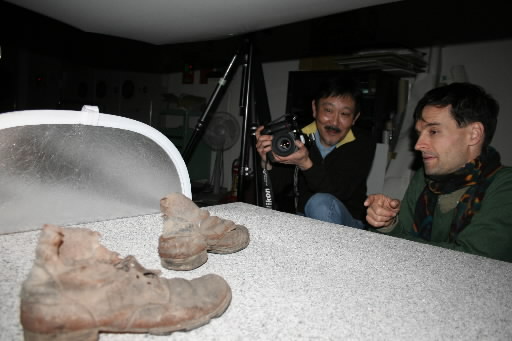 Arthur Binard, 43, an American poet and a resident of Tokyo, is writing a new book for children that will feature the belongings of A-bomb victims. The book is entitled “Sagashite-imasu” (“Searching”). On February 7, Mr. Binard visited Hiroshima Peace Memorial Museum accompanied by Tadashi Okakura, 47, a photographer from Tokyo. At the museum they set to work photographing the artifacts that will be included in the book.

They plan to focus on 14 artifacts that are held by the museum, including a pair of leather shoes worn by a boy who had been mobilized to help dismantle houses to create a fire lane, a girl's notebook, a dress, and a lunchbox. With great care, the two took photos of the belongings that were scarred by the fire of the atomic bombing. They will continue photographing the items on February 8.

The book will feature the belongings of the victims talking about the A-bomb damage and their owners. Mr. Binard, who has read materials regarding the belongings closely, including memoirs written by family members of A-bomb victims that were borrowed from the museum, said that he would like to listen to the unspoken voices of the belongings and convey their messages like an interpreter.

Mr. Binard said that, as a junior high school student in the United States, he felt doubts about the argument he was told which justified the atomic bombings. He came to Japan in 1990.

Mr. Binard has also written poems for a picture book illustrated by Ben Shan concerning the story of the Japanese tuna fishing boat Daigo Fukuryu Maru (The Lucky Dragon No. 5), which was exposed to radioactive fallout produced by a U.S. hydrogen bomb test at the Bikini Atoll in the Pacific Ocean.

The new book will be published by the Doshinsha publishing company in June.