Construction of new pedestrian bridge, adjacent to Peace Bridge, to begin this fall 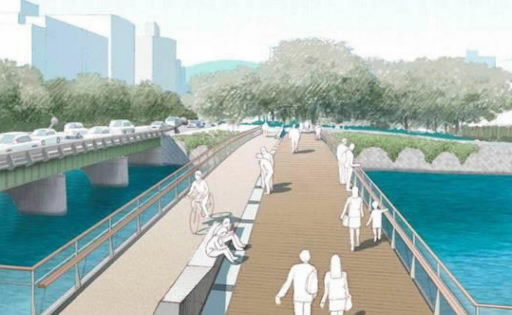 The pedestrian bridge will be built 15 meters north of Peace Bridge on the Motoyasu River. The city solicited proposals for the design of the new pedestrian bridge by holding an international design competition and 29 firms, from both Japan and overseas, submitted entries. Of these entries, the design proposed by the Hiroshima branch of the Nippon Engineering Consultants Co., Ltd. was adopted for the project. In their proposal, the bridge is characterized by a gradual slope and includes small hilly areas on the east bank. The bridge will be 7.9 meters wide and 83.5 meters long and will have a lane for bicycles. The city will allocate 149 million yen for construction costs in fiscal year 2011.

Peace Bridge was built in 1952 in conjunction with the construction of Peace Boulevard. The design of the bridge railings reportedly represent a sunrise. The western Peace Bridge on the Honkawa River constitutes the other half of Peace Bridge, a structure well-loved by Hiroshima citizens as a symbol of peace and the reconstruction of the city.

Peace Bridge is aging, however, and the city once studied the possibility of replacing the bridge. This idea was abandoned due to financial considerations. Instead, the city resolved to prolong the life of the bridge by maintaining and repairing it.

Meanwhile, the sidewalks are busy with pedestrians and bicycles in the morning and evening. Therefore, the city decided to build a new pedestrian bridge based on the criteria that the bridge should complement the existing Peace Bridge, that it would not obstruct the view of the A-bomb Dome, and that the new bridge would appeal to the citizens of Hiroshima.