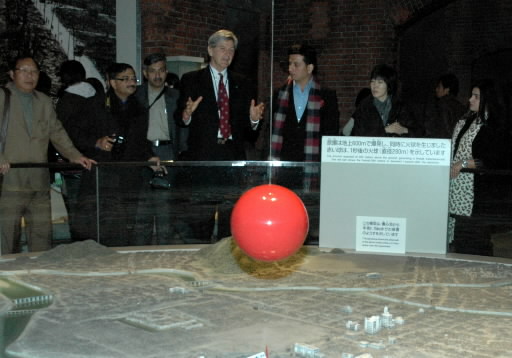 Guided by Steven Leeper, the chairman of the Hiroshima Peace Culture Foundation, the delegation from India looked closely at such exhibits as a panoramic model of the hypocenter area in the aftermath of the atomic bombing. They offered flowers at the Cenotaph for the A-bomb Victims and also listened to the A-bomb account of Yoshiko Kajimoto, 80, an A-bomb survivor and a resident of Hiroshima. Shruti Choudhry, 34, a member of the House of the People (Lower House), expressed her determination to convey her experience of Hiroshima when she returned to India.

The Indian lawmakers arrived in Japan on February 6 at the invitation of the Sasakawa Peace Foundation, located in Tokyo. They will leave Japan on February 13 after paying visits to other locations, including an exchange at a company in Shizuoka Prefecture.