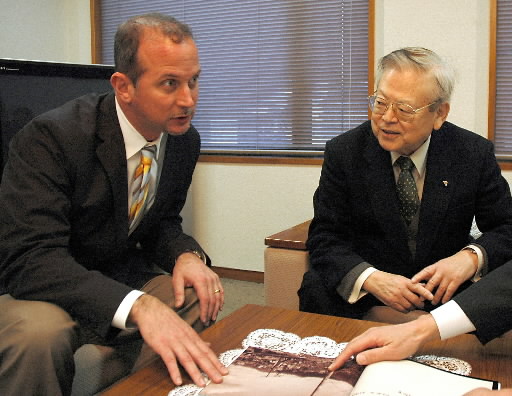 The son of a former U.S. sailor who took photos of the city center three months after the atomic bombing of Hiroshima has donated the photos to the prefecture, the prefectural medical association, and other organizations. The photos were taken by Thomas Vournas, 86, a resident of California. Mr. Vournas revealed the existence of the photos after learning that his son, George, 43, who is a doctor, would be visiting Japan to undergo training with the Hiroshima International Council for Health Care of the Radiation-exposed (HICARE).

The five black-and-white photos capture images of the Fukuya department store, the Honkawa Elementary School, and other scenes in the burned-out city. Each photo has a brief label on the back.

Thomas Vournas was a sailor aboard a U.S. Navy cargo vessel. On November 10, 1945, he drove to Hiroshima from Sasebo in Nagasaki Prefecture, where his ship was making a port call, and took the photographs. After learning about his son’s training in Hiroshima, he got out the photos, which he had kept in a box, and for the first time told his son about what he had seen.

George Vournas is an emergency physician at a hospital to which the Hiroshima Prefectural Medical Association refers atomic bomb survivors who live in North America for health checks. He visited Hiroshima for the first time early this month to study medical treatment for people exposed to radiation in the event of nuclear terrorism.

At the prefectural medical association offices, the photos were shown to Shizuteru Usui, the organization’s president. “Seeing the dramatic scenes of the rebuilding of the city,” George Vournas told Mr. Usui, “I was impressed by how people were moving forward with their lives.” Expressing his gratitude for the photos, which have been bound in an album, Mr. Usui said, “I would like to make use of these photos to ensure that nuclear weapons are never used again.”