Chinese journalists learn about the horrific consequences of the atomic bombing 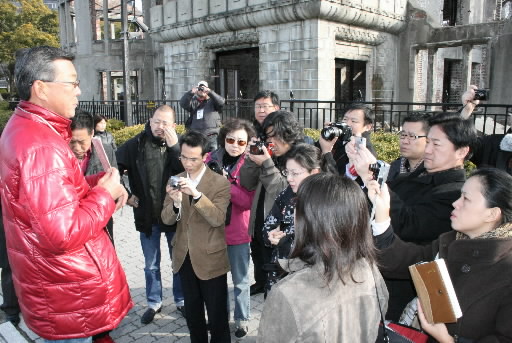 On February 19, 11 Chinese journalists visited Peace Memorial Park in downtown Hiroshima. The horrific consequences of nuclear weapons on human beings was impressed upon them through dialogue with A-bomb survivors and a tour of Peace Memorial Museum.

The group from China is comprised of newspaper reporters, photographers, and magazine editors. At the A-bomb Dome, they were guided by Kosei Mito, 65, a resident of Hiroshima who was in utero at the time of the bombing and was born to an A-bomb survivor. As the Chinese journalists heard how many residents fled to the river in the wake of the blast and died there, they asked such questions as whether the people of Hiroshima feel bitterness toward the United States.

At Peace Memorial Museum, they looked at exhibits like the panoramic model of downtown Hiroshima which depicts the complete devastation of the city center in the aftermath of the bombing, and a charred lunch box. Jian Guang Zhou, 38, senior reporter of the Oriental Morning Post, said that it was heartbreaking to imagine how many innocent people as a result of the bombing. He went on to say that he intends to convey the horrific consequences of nuclear war back in China.

The group arrived in Japan on February 12 at the invitation of the Sasakawa Peace Foundation, based in Tokyo. The group asked to visit Hiroshima and Okinawa in hopes of learning about the path of Japan's reconstruction efforts in the post-World War II era.