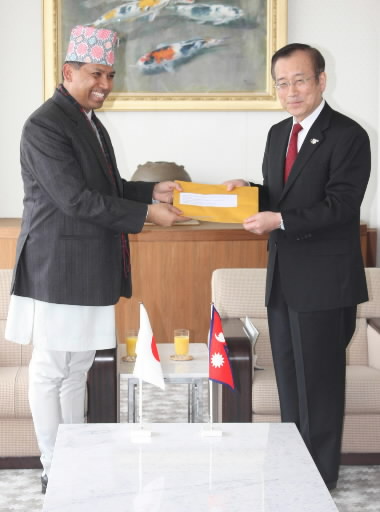 Mr. Subedi explained that Mayor Akiba was chosen for his efforts in appealing for peace and non-violence, making a significant contribution internationally toward the cause of nuclear abolition. The mayor said he was pleased that his receipt of the award serves to confirm that the efforts of the A-bomb survivors have been recognized.

The Gautama Buddha International Peace Award was established by the government of Nepal this year. The initial prize has been awarded to Mayor Akiba and Nagasaki Mayor Tomihisa Taue. The award is given to individuals who promote a message of peace, the teaching advanced by the Buddha, who is said to have originated in Nepal. The award ceremony will be held in Lumbini, the birthplace of the Buddha, on May 17.