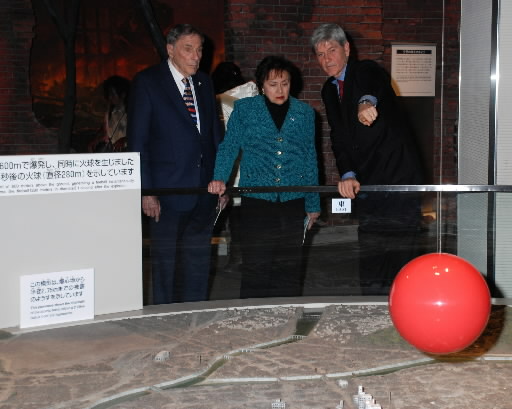 On February 26, Nita Lowey, 73, a U.S. congresswoman, visited Hiroshima and made a tour of Hiroshima Peace Memorial Museum and the Hiroshima National Peace Memorial Hall for the Atomic Bomb Victims in downtown Hiroshima.

Steven Leeper, the chairman of the Hiroshima Peace Culture Foundation, guided her through Peace Memorial Museum. Ms. Lowey expressed surprise at the extent of the A-bomb damage, saying, “I didn’t imagine the A-bomb damage was so extensive.” After touring the museum, she offered flowers at the Cenotaph for the A-bomb Victims and listened to the A-bomb experience of Seiko Ikeda, 78, a resident of Aki Ward. She then shared her determination to work for peace: “We must create a future without nuclear weapons and war.”

Congresswoman Lowey represents the state of New York. She was involved in the reconstruction effort that took place in New York City after the terrorist attacks in the United States in September 2001. She is visiting Japan with her husband, a trip that began on February 20 and will last nine days. This is her first visit to Japan.