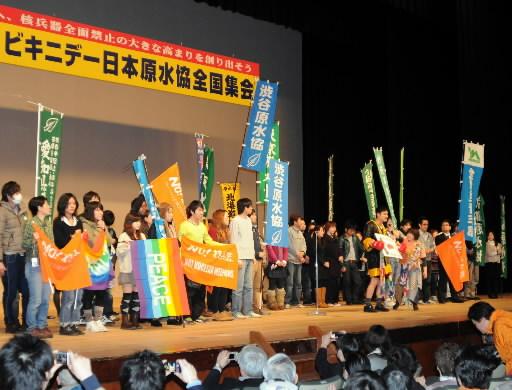 On February 28, the Japan Council against Atomic and Hydrogen Bombs held a conference in the city of Shizuoka prior to the 57th anniversary of Bikini Day on March 1. Bikini Day is observed in memory of an incident that took place on the Bikini Atoll, located in the Marshall Islands in the Pacific Ocean. On March 1, 1954, the Daigo Fukuryu Maru (The Lucky Dragon No. 5), a Japanese tuna fishing boat, was exposed to the nuclear fallout from a U.S. hydrogen bomb test.

Roughly 1,000 people attended the gathering from around the nation. Shoji Sawada, director of the Japan Council against Atomic and Hydrogen Bombs, said at the general meeting that U.N. Secretary General Ban Ki-moon and others have voiced support for their organization's effort to pursue a petition drive which seeks the start of negotiations for a nuclear weapons convention. He appealed to those in attendance to promote the effort, saying, “This is a golden opportunity to press for the start of the negotiations.”

On March 1, the Japan Congress Against A- and H-bombs will also hold a gathering in Shizuoka.