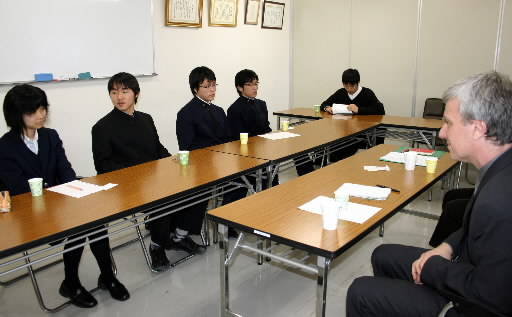 On February 28, Peter Canellos, 48, editorial page editor of the Boston Globe, a newspaper in the U.S. state of Massachusetts, interviewed five high school students in Hiroshima who are members of the “No Nuke Network: Students of Hiroshima Against Nuclear Weapons,” an organization actively seeking the elimination of nuclear weapons.

Mr. Canellos, who had learned that these high school students are calling on U.S. President Barack Obama to visit the A-bombed city, asked such questions as, “Do you want him to apologize in Hiroshima?” Takuya Bajo, 17, a second-year student at Hiroshima Gakuin Senior High School, answered, “Not necessarily. Just having the U.S. president, who can play a vital part in nuclear abolition efforts, visit the A-bombed city would be of great significance.”

Mr. Canellos's visit to Japan is at the invitation of the Foreign Press Center in Tokyo. He will be in Hiroshima until March 1.