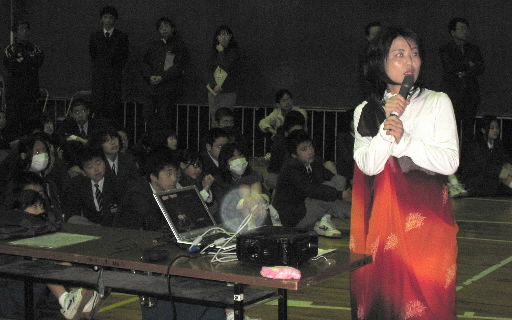 On March 1, Marie Nozaki, 43, a resident of Tokyo who has been providing support to women in the African country of Rwanda to help them live independent lives, gave a speech at the Municipal Yasunishi Junior High School in Asaminami Ward, Hiroshima. She spoke about current conditions in Rwanda, where a bitter civil war took place. The school’s effort to present shoes from its graduates to those in Rwanda, a project that began last year, led to this appearance by Ms. Nozaki.

Ms. Nozaki entered Rwanda in 1995, the year after the ethnic conflict intensified, and, as a member of a nongovernmental organization, became engaged in such efforts as building a vocational training school. Showing photos as she spoke, she told the whole school of roughly 430 students about the scars of the civil war, in which neighbors killed one another. She said, “War destroys not only buildings, but also human minds.”

Expressing her gratitude to the school, Ms. Nozaki said that 50 pairs of indoor sneakers donated by the students through the Hiroshima-asa Lions Club and other organizations are now being used by war orphans there. Chiharu Oda, 13, a first-year student, commented, “I was shocked that many children lost their parents due to war. I want to wash our sneakers clean and give these shoes to people in Rwanda.”