Father Klaus Luhmer, engaged in relief efforts after the atomic bombing, dies at 94 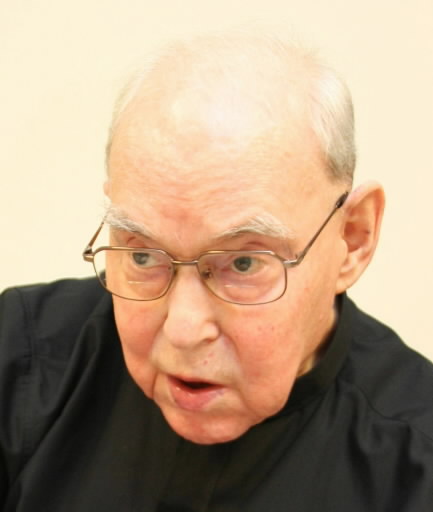 On the afternoon of March 1, Father Klaus Luhmer, who was engaged in relief activities for citizens of Hiroshima in the aftermath of the atomic bombing, died of pneumonia at a hospital in Tokyo. He was 94 years old and from Cologne, Germany. He lived in the Loyola House in Nerima Ward, Tokyo. Father Klaus was professor emeritus at Sophia University and the Sophia School Corporation plans to hold a memorial service at the Grand Prince Hotel Akasaka in Chiyoda Ward, Tokyo at 11 a.m. on March 29.

Father Luhmer came to Japan in 1937. On August 6, 1945, he experienced the atomic bombing at the Nagatsuka Jesuit novitiate in Asaminami Ward, Hiroshima. He carried Father Hugo Enomiya-Lassalle, who was exposed to the atomic bombing in the Nobori part of downtown Hiroshima, on a stretcher, among others. Father Enomiya-Lassalle, who later became an honorary citizen of Hiroshima, died in 1990. Father Luhmer, along with Father Pedro Arrupe, rector of the novitiate, provided treatment to citizens who suffered burns and then fled to the novitiate. (Father Arrupe died in 1991.) Father Luhmer was a professor of Sophia University from 1957 to 1984 and the chancellor of the Sophia School Corporation from 1987 to 1992. He shared his A-bomb experience with others, with such messages as “We need to foster the awareness of having love for peace, an idea that should be shared by the whole of humanity, starting in childhood.” He also met a request by Hiroshima Peace Memorial Museum, administered by the City of Hiroshima, permitting the museum to make a videotaped record of his A-bomb account.