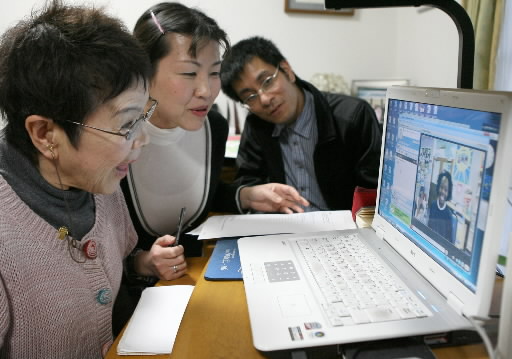 Junior high school students in the United Kingdom listened to an A-bomb survivor through the Internet on the evening of March 1. Miyoko Matsubara, 78, a resident of Minami Ward, Hiroshima, was asked by a teacher of a British school to talk about her experiences to his students, in the wake of a BBC program in which a Japanese man who experienced both the atomic bombings of Hiroshima and Nagasaki became the butt of a joke.

Via a webcast, Ms. Matsubara spoke from her home, Hiroshima to 17 students in a classroom at Wavell School located in the suburbs of London. The students are between the ages of 11 and 15 and they study Japanese culture in an after-school program. Ms. Matsubara talked about her experiences in English, from her computer, for about one hour. She spoke emotionally about her experiences, including her ordeal due to keloids caused by burns to her face and other parts of her body.

After the students listened to her story, they responded with the message: We have learned about the horror of the atomic bomb for the first time; such a tragedy should never be repeated.

Alan Greaves, 41, a teacher at Wavell School, worked for a company in Nagasaki for two years from 1995. Learning about the BBC program with a heavy heart, he contacted Ms. Matsubara to share her A-bomb experience through his Japanese friends. They are also teachers and had told him about her A-bomb-related activities before.

Mr. Greaves expressed his gratitude to Ms. Matsubara through the Internet, saying, “This was a precious opportunity for my students to understand what was really brought about by the atomic bomb.” Ms. Matsubara commented, “I was really moved by how attentively the students listened to me. I feel so encouraged that I can continue to convey my experience of the bombing to others.”