Progress to be made toward Cut-off Treaty?: Japan’s efforts carefully watched by the world 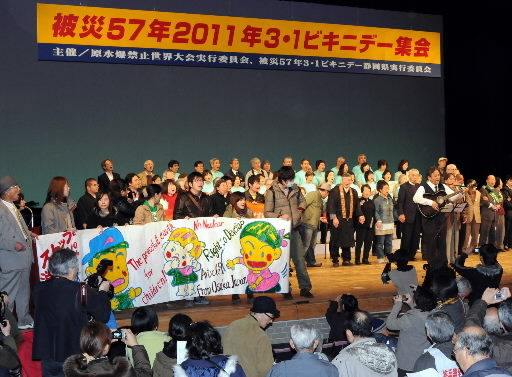 This year's efforts by citizens in pursuit of nuclear abolition have begun to gather momentum following Bikini Day observances on March 1, the day the Daigo Fukuryu Maru (The Lucky Dragon No. 5), a Japanese tuna fishing boat, was exposed to nuclear fallout produced by a U.S. hydrogen bomb experiment 57 years ago. However, the year 2011 is an “off year” with no major conferences on nuclear disarmament scheduled. As the A-bombed nation, Japan must make steady efforts to advance the elimination of nuclear weapons, including the start of negotiations for the Fissile Material Cut-off Treaty and a nuclear weapons convention.

On March 1, at the gathering of the Japan Congress Against A- and H-bombs, held in the city of Shizuoka, Koichi Kawano, chair of the organization, emphasized, “We have to decide on concrete measures to eliminate nuclear weapons.” On the same day, the Japan Council against Atomic and Hydrogen Bombs, along with other organizations, vowed to expand its petition drive for the start of negotiations for a nuclear weapons convention at its own gathering, held in the city of Yaizu, Shizuoka Prefecture.

Governments and nongovernmental organizations (NGOs) invested significant effort to ensure the success of the Nuclear Non-proliferation Treaty (NPT) Review Conference, held at United Nations headquarters in New York last May. The NPT Review Conference is held once every five years and is regarded as the “crossroads” of nuclear disarmament. At last year's conference, despite compromises made with the nuclear weapon states, a final document was adopted which consisted largely of a 64-item action plan that pledged to pursue “a world without nuclear weapons.” However, this year will not even see a meeting of the NPT Preparatory Committee.

Under these circumstances, governments have placed a priority on the start of negotiations for the Cut-off Treaty, a provision of the NPT action plan. From February 14-16, Japanese and Australian Ambassadors for Disarmament co-hosted a meeting of experts on treaties at the United Nations Office in Geneva, Switzerland.


“Worthwhile discussion”
The meeting was set up as a “side event” in order to foster a breakthrough in the situation in which the Geneva Conference on Disarmament (CD), which deals with the treaty, cannot even begin negotiations due to Pakistan’s passive attitude. Ambassadors and others from about 40 nations, more than half of the member nations, attended the meeting and discussed the definition of fissionable materials and other themes. Japan’s Ministry of Foreign Affairs (MOFA) intends to hold such meetings recurrently with a view to making proposals to the CD.

Meanwhile, a speech that was given by Ambassador Akio Suda, head of the Delegation of Japan to the CD, at the CD on January 27 has attracted the attention of NGOs. Referring to a nuclear weapons convention, Mr. Suda said, “I would like to engage in this discussion from a long-term perspective, taking into account what will become of the treaty in the last phase of nuclear disarmament.” The U.S. Ambassador for Disarmament, too, stated in September of last year that talks over the treaty would be a worthwhile discussion. In short, Mr. Suda is in step with the U.S. Ambassador.

The Arms Control and Disarmament Division of MOFA commented, “We have not wavered from the stance we have set that an immediate start to the discussion would be too early.” However, it is certain that a series of moves, such as the appeal for negotiations for the treaty by a large number of non-nuclear weapon states, NGOs, and U.N. Secretary General Ban Ki-moon, as well as the inclusion of the item “the consideration of negotiations” on a nuclear weapons convention in the final document of the NPT Review Conference, lay behind Mr. Suda’s statement.

Akira Kawasaki, executive committee member of Peace Boat, a Tokyo-based NGO seeking the start of the negotiations, said, “The fact that the government expressed a positive will in a speech on foreign affairs is a significant step.” He intends to closely watch future developments.


Never-ending causes for concern
However, not all developments are so positive. There is no end to causes for concern, including the nuclear dilemmas involving North Korea and Iran, as well as the murky nuclear capability of China. Hirofumi Tosaki, resident senior fellow of the Center for the Promotion of Disarmament and Non-proliferation, noted, “The point is whether we can maintain the conditions which allow us to talk about a world without nuclear weapons. At the same time, we must make steady efforts, including improvement in the transparency of each nation's nuclear capability.”

“We still have an endless way to go toward a world without nuclear weapons,” said Seiji Maehara, former Japanese foreign minister, at a news conference in February. As the A-bombed nation, Japan's energetic pursuit of this path is called into question.