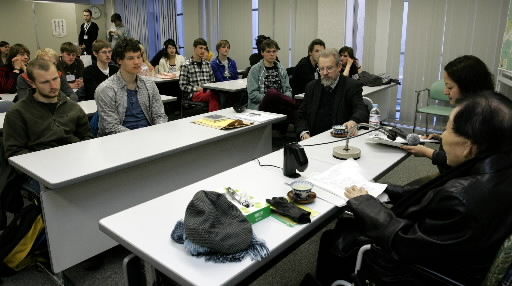 Mission of the A-bombed city

On March 9 a group of 25 young people from Germany, including college students and conscientious objectors, visited Hiroshima Peace Memorial Museum. Speaking to the group, Akihiro Takahashi, 79, former director of the museum, said, “As a survivor of the atomic bombing, it is my responsibility to convey to future generations the voices of those who died and cannot speak for themselves.”

Since injuring his back in 2009, Mr. Takahashi has given his talks while seated in a wheelchair. Fighting back tears, he showed photos of his right arm, which is bent as the result of keloid scars, and described how he suffered from burns and illness. Jean Bauer, a 20-year-old college student from Dusseldorf, said Mr. Takahashi’s talk was a painful reminder of the experiences of his grandparents, who survived the Nazi concentration camps. He said he would tell others about his experiences in Hiroshima.

Thirty-three atomic bomb survivors, including Mr. Takahashi, are registered with the museum as witnesses of the bombing. Their average age is 79. How can the message of Hiroshima be conveyed to the world while passing on the accounts of the experiences of the A-bomb survivors to the next generation? This is a key question facing the city.

In order to pursue efforts in this direction, Mayor Tadatoshi Akiba focused on Mayors for Peace, an organization that seeks to bring together like-minded mayors of cities both in Japan and overseas. Mr. Akiba himself serves as the organization’s president. During his mayoral tenure of three terms spanning 12 years, Mr. Akiba made official trips to 29 countries over the course of 355 days. Despite being criticized by members of the city council for neglecting city affairs, he traveled around the world to attend international conferences and other events. In collaboration primarily with activists with connections to non-governmental organizations and the United Nations, he sought new members for Mayors for Peace.

As a result, the number of cities belonging to the organization increased nearly ten-fold from 464 at the start of Mr. Akiba’s tenure to 4,540 today. “As the number of member cities grows, the visibility of Mayors for Peace is enhanced, and this leads to further growth in membership. This, in turn, enhances the impact of Hiroshima’s message,” said Manabu Iwasaki, division director of the Mayors for Peace Secretariat. Mr. Iwasaki also works with the Hiroshima Peace Culture Foundation, an extra-governmental organization.

Mr. Akiba put forward his personal beliefs and exerted a strong presence, particularly overseas. It remains to be seen whether this method of pursuing the abolition of nuclear weapons, which focuses on the creation of international public opinion, will be carried on by the new mayor, who will take office in April, or whether it will change. Tim Wright, a representative from the International Campaign to Abolish Nuclear Weapons, which is headquartered in Melbourne, Australia, said that the new mayor’s attitude toward Mayors for Peace would be the focus of international attention.

Quite a number of people, however, feel that Mr. Akiba’s peace politics overemphasized global issues. “All the focus was on the mayor’s activities, but this movement did not involve the citizens of Hiroshima,” said Toshiyuki Tanaka, a professor at the Hiroshima Peace Institute of Hiroshima City University. He added, “The city must make an effort to broaden sympathy for the cause of Hiroshima around the world by not only promoting the abolition of nuclear weapons but also by drawing attention to the destruction that results from conflicts.”

Maeko Nobumoto, 62, has traveled throughout Japan as part of a volunteer effort to boost the number of cities in Japan that belong to Mayors for Peace. “If we don’t change the situation in which Japan is reliant on the nuclear umbrella of the United States, our plea for nuclear abolition won’t carry any weight with the rest of the world,” she said. “We must also focus efforts on influencing the Japanese government.”

Sixty-five years have passed since the first atomic bomb in human history was dropped on Hiroshima. Yet the road to the abolition of nuclear weapons remains rough. How should the mayor of Hiroshima address this reality? The basic focus of the mayor of Hiroshima remains to heed the cries of Mr. Takahashi and other A-bomb survivors to convey the voices of the victims to future generations and carry on the struggle.

The peace politics of the Akiba administration
The Akiba administration intensified international efforts, revolving around Mayors for Peace, which includes cities both in Japan and overseas. Mayors for Peace launched its 2020 Vision Campaign, which seeks abolition of nuclear weapons by the year 2020, and campaign headquarters were set up in Ypres, Belgium. In 2008 Mayors for Peace issued its Hiroshima-Nagasaki Protocol, which sets out a road map for achieving the goals of the 2020 Vision. The group hoped to have the protocol adopted at the review conference of the Nuclear Non-proliferation Treaty in 2010, but in the end it was not submitted for approval. The joint Hiroshima-Nagasaki Atomic Bomb Exhibition has been held in 158 cities in 11 countries around the world. Since 2009 the administration has promoted its “Obamajority Campaign” in an effort to galvanize public opinion in support of U.S. President Barack Obama’s stated goal of “a world without nuclear weapons.”