Interview with Kenji Kamiya, director of RIRBM, on impact of radiation leakage from Fukushima No. 1 nuclear power plant 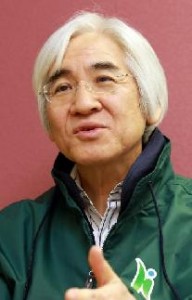 An accident at the Fukushima No. 1 nuclear power plant, run by Tokyo Electric Power Co. (TEPCO), which has resulted in the leakage of radioactive substances, has sent out shock waves at home and abroad. To what extent will the amount of radiation that is known to date affect the health of local residents? On March 13, the Chugoku Shimbun interviewed Kenji Kamiya, director of Hiroshima University’s Research Institute for Radiation Biology and Medicine (RIRBM) in Minami Ward, Hiroshima.

What is your impression of the situation?
Something that should never happen has now happened. It's a serious situation. However, the radiation level of “1557.5 microsieverts per hour,” which was detected in the neighborhood of the plant on the afternoon of March 13, is not damaging enough to cause health problems even at the measurement site.

However, it does not mean that exposure to low-dose radiation will not affect the human body. We have no way of really telling because no epidemiologically-significant difference has been found so far. It is best not to be exposed to radiation at all.

What sorts of actions should be taken now?
As of this moment, it's highly unlikely that health damage will result from this leakage. However, it's natural that local residents would feel insecure. The Japanese government must accurately grasp the situation and the scale of the radiation exposure to local residents, release reliable information, and promptly provide the necessary medical treatment.

However, the affected areas are in confusion, and we're having difficulty obtaining information. It seems that information pipelines that are vital in a time of disaster are not secured. This is a grave issue.

How should people respond if such a situation occurs again?
Close your windows and extractor fans so that the outside air will not come into homes and buildings. When you go outside, cover your mouth with a mask or a wet towel. The best thing to do is avoid anything suspected of radioactive contamination.

The level of radiation exposure that this incident has caused can be removed, for the most part, through the decontamination process. When you have a wound of some kind, radioactive substances may be deposited in the wound. In this event, you will need to receive medical treatment.

Hiroshima University’s medical team, which is trained to handle situations of emergency radiation exposure, has entered the site and begun operations.
There are only two medical institutions in Japan, including Hiroshima University, which have been appointed by the Japanese government as bases for providing treatment to those severely affected by nuclear-related accidents. When people begin to suffer from nuclear-related accidents in reality, we must play a role, without fail, in making the most of the knowledge and expertise that have been accumulated in connection with the suffering of A-bomb survivors. We have established a system in which we can make contributions in any phase of need.