Chair of Korean A-bomb survivors’ organization and others to appeal for nuclear abolition at U.N. headquarters 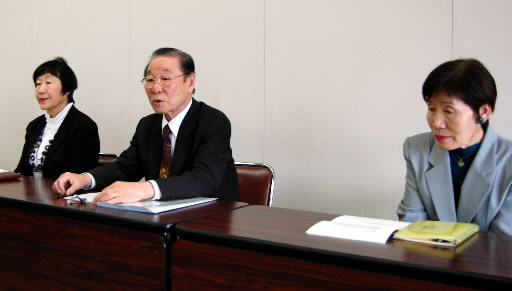 On March 24, Lee Sil Gun, 81, a resident of Nishi Ward and chair of the Council of Atom-bombed Koreans in Hiroshima, will visit U.N. headquarters in New York, along with sisters of A-bomb survivors in Hiroshima, and hand a formal request calling for efforts to eliminate nuclear weapons to U.N. Secretary General Ban Ki-moon.

The visit to U.N. headquarters will include Mr. Lee, Toshiko Tanaka, 72, a resident of Higashi Ward who has shared her A-bomb experience in the United States, and her younger sister Motoko Nakamura, 66, a resident of Kaita town, Hiroshima. Mr. Lee, who, as a representative of A-bomb survivors, met with Mr. Ban during Mr. Ban’s visit to Hiroshima in August of last year, presented the idea at their meeting, saying, “I would like to appeal for nuclear abolition at the United Nations.”

On March 16, the three held a news conference at Hiroshima City Hall. Mr. Lee said, “I will strive hard to advance the momentum for nuclear abolition,” while Ms. Tanaka commented, “I would like to appeal to the Secretary General from the perspective of a citizen.” Ms. Nakamura added, “I would like to convey my feelings for the future of children.”

The formal request, which will appeal for nuclear abolition, will be written by the three A-bomb survivors. They will also bring to New York a letter written by Sunao Tsuboi, 85, co-chairperson of the Japan Confederation of A- and H-bomb Sufferers Organization, and a request compiled by high school students in the city of Hiroshima, the city of Fukuyama in Hiroshima Prefecture, and Okinawa Prefecture.