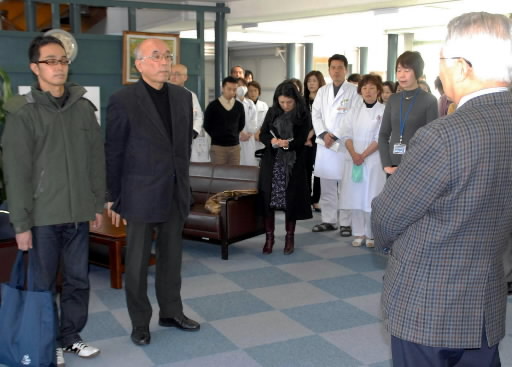 On March 17, the Radiation Effects Research Foundation (RERF) in Minami Ward, Hiroshima, dispatched a researcher of radiation and a radiological technician to the city of Yamagata in response to the nuclear crisis at the Fukushima No. 1 nuclear power plant, a situation resulting from damage to the reactors caused by the earthquake and tsunami of March 11. The two will measure radiation levels of local residents who have been evacuated from Fukushima Prefecture. The results of these measurements will provide data with which to grasp the radiation exposure to residents and conduct health consultations.

This is RERF’s second dispatch of its workers due to a nuclear emergency, following the criticality accident at the Tokaimura nuclear facility in Ibaraki Prefecture in 1999. On March 16, RERF received a dispatch request from Yamagata Prefecture through the Ministry of Health, Labor and Welfare.

On March 17, in advance of the dispatch, RERF’s chairman Toshiteru Okubo and others offered words of encouragement to Norio Takahashi, 63, a researcher at RERF’s Department of Genetics, and Katsuhiko Yamasaki, 35, a radiological technician at RERF’s Nagasaki Laboratory, who will travel to the affected area. Dr. Takahashi said, “I would like to help ease the fears of residents who have been evacuated from that area.” Mr. Yamasaki added, “This is the first time for me to be dispatched on a disaster relief mission. I intend to do my best.”

While based at a public health center in the city of Yamagata, the two will pursue their relief efforts until March 24. RERF has also sent a radiological technician to a medical team dispatched to Fukushima Prefecture by the Hiroshima International Council for Health Care of the Radiation-exposed (HICARE), an organization formed by Hiroshima Prefecture, the City of Hiroshima, and other entities.