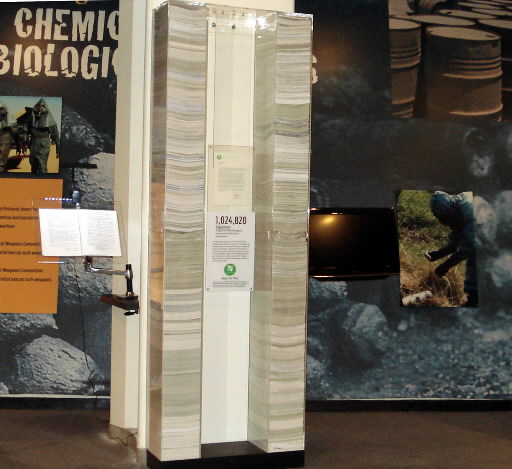 A permanent exhibit of 1.02 million signatures calling for the elimination of nuclear weapons was constructed this month at United Nations headquarters in New York. The signatures were submitted to the U.N. by Mayors for Peace, for which Hiroshima Mayor Tadatoshi Akiba serves as president. A ceremony to mark the creation of the new exhibit will take place on March 24 and Secretary General Ban Ki-moon is expected to attend.

According to the U.N. Office of Disarmament Affairs (UNODA), the sheets of paper bearing the signatures of supporters of the “Cities Are Not Targets (CANT)” project were stacked to form two three-meter towers and then covered in glass.

A representative of UNODA said, “The signatures are from all corners of the world and offer a good example of the power of civil society in advocating for nuclear disarmament. We have decided to put them on display as a kind of work of art.”

Mayor Akiba visited U.N. headquarters to submit a list of the signatures in October 2008 and May 2010 and later sent the actual signatures. The CANT project signatures call for a ban on targeting cities for nuclear attack and eliminating all nuclear weapons by 2020. From February 2007 to April 2010, 1,024,820 people from about 40 countries signed the petition. The campaign to collect signatures is still on-going.

Manabu Iwasaki, division director of the Mayors for Peace Secretariat at the Hiroshima Peace Culture Foundation, said, “The exhibit can be seen by diplomats from the different countries in charge of nuclear disarmament negotiations and by the general public who visit the United Nations. We hope that our wish for the abolition of nuclear weapons will be shared by many more people.”