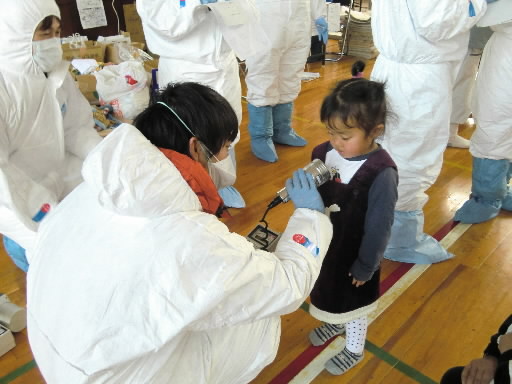 One week has passed since the massive earthquake that rocked eastern Japan on March 11. The end to the crisis at the Fukushima No. 1 nuclear power plant, which was damaged in the earthquake, is still nowhere in sight. As this crisis lingers, the concerns of local residents over radioactive contamination are only growing more widespread. I paid visits to evacuation centers in the stricken area, accompanying a medical team from Hiroshima University trained to handle instances of emergency radiation exposure. The team has measured the radiation levels of residents and provided them with medical support since arriving in the area on March 17.

The sun was setting and it was starting to get chilly. We were at an evacuation center that had been set up in the former Ojima Elementary School in the town of Kawamata in Fukushima Prefecture. The school's classrooms and auditorium are being used to shelter those displaced by the disaster. The Hiroshima University medical team was about to leave the evacuation center when someone approached the team members and asked: “Won't you do any more screening tests for us today?”

It was a woman, 83 years old, who had evacuated with her family from the town of Futaba, where the nuclear plant is located. She asked if the team could measure the radiation level of her granddaughter, who would soon return to the evacuation center. She murmured, “My granddaughter is five months pregnant. I’m worried sick about her, because it seems she was walking around outside when the evacuation order was given so she could flee nearby Tomioka town.”

The Hiroshima University medical team, led by Keiichiro Mihara, assistant professor in the Department of Hematology and Oncology at Hiroshima University Hospital, is comprised of six members including a doctor, a nurse, and a radiological technician. One person who saw the name of the university on the team's uniforms put hands together in prayer and thanked them, saying, “Thank you so much for coming all this way.” I keenly felt the weight of expectations on Hiroshima University, where the results of medical care provided to A-bomb survivors over the years have been accumulated.

Long queues immediately formed at every evacuation center that the team visited. In these queues were a considerable number of elderly people. It was not uncommon to see parents and children undergo the screening tests as well. The members of the medical team measured the radiation levels of the residents, starting from their heads, to their necks, to their shoulders, to their legs, and then to their hands. The screening test takes three or four minutes per person. To avoid disturbing the examinees, the team members turned off the sounds produced by the equipment.

Among the 340 people who underwent screening that day, no one was judged to need decontamination, which involves washing away any radioactive substances via showers or other measures. Overall, too, a level of radiation exposure among the residents that could raise concerns over effects to health has not been detected to date.

One mother held out a child's coat toward the equipment which measures radiation levels. “My child didn't put up an umbrella on March 15, when the explosions and fires were occurring at the plant one after another,” she explained. When she was told that the coat was not contaminated, she at last showed a look of relief.

The Disaster Countermeasures Office of Fukushima Prefecture provides a “screening certificate” to everyone who has undergone the radiation screening. The screening is also intended to allay the health concerns of the residents. However, it is said that they are often required to show their certificates when they enter an evacuation center or visit a hospital.

Specialists have declared that even if someone has been affected by radiation, there is no possibility that the people around him or her will suffer from secondary radiation exposure. I cannot help but feel that undue fear has been aroused as a consequence of poor sharing of accurate information.

In the area within a radius of 20 kilometers of the nuclear power plant, from which people had no choice but to evacuate, a substantial number have been forced to face the triple hardships caused by the earthquake, the tsunami, and the nuclear crisis. “I want to go back to where I was born and raised,” said one man, 63, whose house was swept away by the raging waters. “But I don't know when I can...”