Toshiteru Okubo, chairman of RERF, explains effects of radiation on the human body 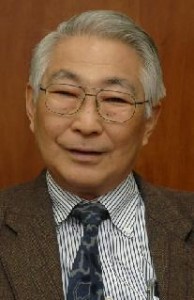 As a result of the ongoing crisis at the Fukushima No.1 nuclear power plant, run by the Tokyo Electric Power Company, radiation has been detected in such things as agricultural products. The Chugoku Shimbun interviewed Toshiteru Okubo, 71, chairman of the Radiation Effects Research Foundation (RERF) in Minami Ward, Hiroshima, and asked what sort of caution should be taken in people's daily lives.

Radioactive iodine, 27 times higher than the regulated limit, was detected in spinach produced in Ibaraki Prefecture. Would such spinach have any harmful effects on human health?
Eating this vegetable once or two would not matter. After vegetables are washed or boiled, there is a considerable drop in the amount of radioactive materials. But once radioactive materials are ingested or inhaled, they will continue to release radiation in the body for a certain period of time. This is known as “internal exposure,” to be distinguished from “external exposure.” So it would be best to avoid eating vegetables that have become contaminated.

How long does this radiation continue to be released? What sort of caution is needed?
The half-life of iodine-131 is eight days, a short time, but the half-life of some other radioactive materials such as strontium is several decades, which is quite long. Strontium, if it accumulates in the bones, increases the risk of leukemia. As shipments of these contaminated leafy vegetables have been stopped by the national government, I don't believe they will circulate in the marketplace. After the Chernobyl accident, radioactive materials became concentrated in the food chain and in contaminated livestock, among other things. Livestock and fish and such food products must now be periodically checked to confirm their safety. In order to reduce the risk, we should avoid only eating food produced in one area.

Do the health risks from radiation differ depending on a person's age?
The risk of thyroid cancer caused by radioactive iodine accumulating in the thyroid gland is higher among younger children. This is because when children are growing, more iodine is taken into the body. Furthermore, chromosomes are susceptible to damage during cell division. As cell division is especially active in young people, they are more susceptible to the effects of radiation. Among the younger survivors of the atomic bombing of Hiroshima, too, there is data which shows that the incidence of cancer is higher for this group.

Profile
Toshiteru Okubo
Dr. Okubo graduated from the School of Medicine at Keio University. He formerly served as professor and president at the University of Occupational and Environmental Health. In April 2005, he assumed the post of RERF vice chairman, and his current post of chairman in July 2005. His field of expertise is environmental medicine.