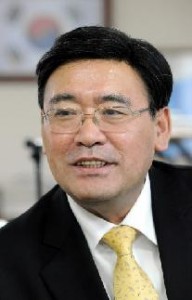 Shin Hyung-Keun, as a consul general and a second-generation A-bomb survivor, serves as a bridge for interaction between Japan and his home country of South Korea. “I feel both deep emotion and deep responsibility,” Mr. Shin said. A serious expression replaced a gentle smile on the face of the new head of the Consulate General of the Republic of Korea in Hiroshima, which is located in Minami Ward, Hiroshima.

Mr. Shin’s father was the late Shin Yong-Su, who served as chair of the South Korean Atomic Bomb Sufferers Association. Mr. Shin’s father returned to his nation after experiencing the atomic bombing of Hiroshima. He spearheaded the A-bomb survivors’ movement overseas, which included efforts that led to his obtaining the Atomic Bomb Survivor’s Certificate in 1974, the first acquisition of the certificate by an A-bomb survivor in South Korea.

Mr. Shin said, “My father always said that the A-bomb survivors’ movement also constituted a starting point from which Japan and South Korea could surmount their unfortunate history and form genuine friendly relations.”

Mr. Shin has visited Japan before, but this is the first time that he has taken a post in Japan. He saw this transfer in the following light: “I have been guided by my father’s hope that his son would, as a second-generation A-bomb survivor, become a bridge between South Korea and Hiroshima.” Mr. Shin’s father persisted in his view that he wished to link the A-bomb survivors’ movement to the elimination of nuclear weapons. Mr. Shin is determined to carry on his father’s strong aspiration and assume a role in forming “genuine friendly relations” between Japan and South Korea. For that purpose, too, Mr. Shin expresses eagerness to join hands with the citizens of the A-bombed city of Hiroshima.

Mr. Shin’s mission as consul general, the post that he assumed on March 10, includes a wide variety of tasks, from providing support to Koreans in Japan to promoting exchange with the five prefectures in the Chugoku Region, for which the consulate general has oversight. He is confident that people-to-people exchange between Japan and South Korea will be able to increase if information can be better conveyed, as there are abundant tourism resources in the Chugoku Region. During his 33-year career as a diplomat, Mr. Shin has been posted to China four times, including tenures in Beijing and Tsingtao. He also intends to put forth efforts to expand trilateral exchange, including China.

Mr. Shin is now residing in Hiroshima with his wife and mother. “I’m looking forward to visiting a variety of places in the Chugoku Region. I would like to deepen my exchanges with my fathers’ friends, who gave him their support.”