Issue of spent nuclear fuel, accumulating across Japan, must be urgently addressed 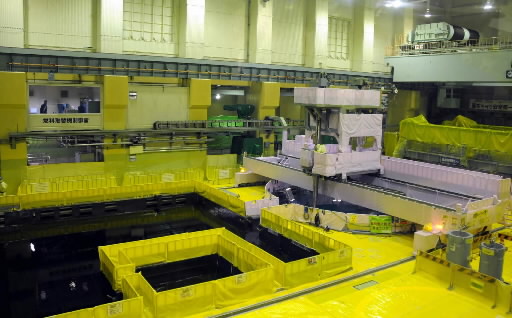 In addition to the critical state of the nuclear reactors at the Fukushima No. 1 nuclear power plant, run by the Tokyo Electric Power Co. (TEPCO), the condition of the pools which store a large number of spent nuclear fuel rods has grown acute. This has further complicated the already grave situation involving the stricken nuclear plant. As the amount of spent fuel continues to accumulate at nuclear power plants across Japan, including in Shimane Prefecture, the issue of this stored fuel must be urgently addressed by all power companies.

The Shimane nuclear power plant, run by Hiroshima-based Chugoku Electric Power Company, also contains 322 spent fuel rods in the storage pool at the No. 1 reactor and 1,956 rods at the No. 2 reactor. They occupy about 49% of the maximum storage capacity of the pools. Each time a periodical inspection is carried out at the plant, once every 13 months, the total number of spent fuel rods stored at the No. 1 and No. 2 reactors has increased by about 220. No spent fuel rods have been transferred to reprocessing plants or other facilities since September 2008.

This can be attributed to a delay in establishing the nuclear fuel cycle, which aims at disposing of the spent fuel after separating out from it the uranium and plutonium. The start of operations at the reprocessing plant located in Rokkasho-mura in Aomori Prefecture has been postponed repeatedly and is now more than ten years overdue.

Some electric power companies, including TEPCO, are planning to construct “interim storage facilities” in which spent fuel is to be stored temporarily. These facilities, however, would not solve the problem of the large amount of spent fuel that remains unprocessed.

The Chugoku Electric Power Company (CEPCO) has increased the storage capacity of its spent fuel pools by “re-racking” or placing the fuel rods closer together. In this way the storage capacity of the No. 1 reactor has been doubled, and that of the No. 2 reactor has been increased by half. Simple arithmetic, however, shows that both pools will still be filled by the year 2030.

Shimane Prefecture stressed: “The spent fuel accumulating at the nuclear power plant here is problematic. The crisis in Fukushima has revealed the risk of storage pools, too, outside containment vessels.” CEPCO stated: “The storage of spent fuel is certainly an issue that needs to be solved in the near future, but we will pursue every possible safety measure without delay.”

Spent fuel
As spent fuel continues to release heat even after nuclear fission has stopped, it is cooled down over a period of several years in storage pools at nuclear power plants. According to the Federation of Electric Power Companies of Japan, spent fuel equivalent to 13,530 tons of uranium was being stored in Japan as of the end of September 2010, occupying 66% of the total managing capacity. At some nuclear power plants, including Fukushima No. 1, spent fuel in storage exceeds 80 percent of capacity.