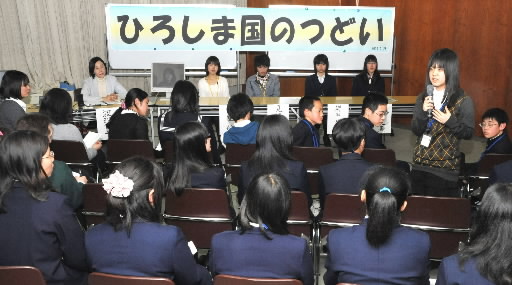 One of the former junior writers, Kyoko Niiyama, 21, joined the gathering via video conferencing through the Internet. Ms. Niiyama is now studying abroad in the U.S. state of Ohio, where she is a junior in college. She commented, “Through my news gathering activities, I learned the importance of conveying a wide range of messages of peace.” Minako Iwata, 17, a second-year student at Hiroshima Nagisa High School and a current junior writer, said, “I came to be involved in the efforts of a local group called the ‘No Nuke Network: Students of Hiroshima Against Nuclear Weapons,’ which seeks to abolish all nuclear weapons.” Daichi Ishii, 14, a second-year student at Hiroshima Gakuin Junior High School, proposed sending books to areas afflicted by the massive earthquake which recently hit eastern Japan. He appealed for assistance for the victims of the disaster, saying, “Now is the time for us to help one another.”

Contents of the past 87 issues of the newspaper were on display, and donations were collected to support the victims of the earthquake and tsunami. Maho Kono, an 11-year-old fifth grader at Kaita Higashi Elementary School, said, “I feel it's important to challenge myself, no matter what it may be.” Further details of the gathering will be shared in the April 10 issue of Peace Seeds.