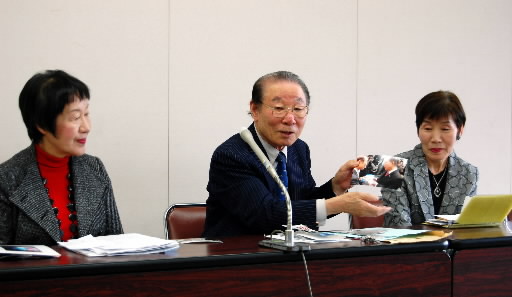 The three A-bomb survivors are Lee Sil Gun, 81, a resident of Nishi Ward and chair of the Council of Atom-bombed Koreans in Hiroshima, Toshiko Tanaka, 72, a resident of Higashi Ward, and Ms. Tanaka’s younger sister Motoko Nakamura, 66, a resident of Kaita town. On March 24, they met with Mr. Ban at U.N. headquarters in New York.

On that day, a ceremony was held to celebrate the completion of a permanent exhibit at U.N. headquarters which is composed of 1.02 million signatures in support of nuclear abolition. These signatures were submitted by Mayors for Peace, for which Hiroshima Mayor Tadatoshi Akiba serves as president. The three A-bomb survivors attended the ceremony. Mr. Lee exchanged words with Mr. Ban and handed him a written appeal to eliminate nuclear weapons.

Mr. Lee said, “Mr. Ban repeatedly shook my hand. It was so encouraging to hear Mr. Ban’s thoughts on nuclear abolition.” Ms. Tanaka commented, “I again realized the mission of A-bomb survivors.” Ms. Nakamura reflected on her trip and said, “I think, to some extent at least, we were able to convey our call for nuclear abolition.”