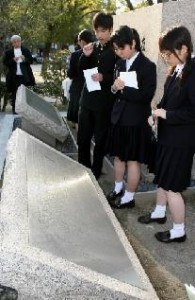 On March 30, ten members of the “10,000 High School Students Signatures Campaign Executive Committee,” which has been engaged in efforts in Nagasaki to eliminate nuclear weapons, arrived in Hiroshima. The younger generation from the A-bombed cities of Hiroshima and Nagasaki have come together for activities to deepen their ties.

The ten students from Nagasaki joined about 30 members of the “No Nuke Network: Students of Hiroshima Against Nuclear Weapons,” and the group as a whole listened to the A-bomb account of Keiji Nakazawa, 72, author of the “Barefoot Gen” manga series, in the east wing of Hiroshima Peace Memorial Museum. Mr. Nakazawa offered advice to the youth, saying, “I hope that you will ponder not only nuclear abolition but also Japan’s responsibility for the war.”

Subsequently, the students, guided by Nobuo Takahashi, 72, who is involved in efforts to preserve A-bomb remains, visited memorials in and around Hiroshima Peace Memorial Park. During this tour they touched the history of Hiroshima, in which a large number of junior high school students and others mobilized for the war effort to demolish buildings for the purpose of creating fire lanes fell victim to the atomic bomb.

Masanori Aoki, 17, a second-year student at Nagasaki Nanzan High School, said, “I have now learned that there are differences in the reality of the A-bomb damage between Nagasaki and Hiroshima.” Nozomu Shintani, 16, a first-year student at Hiroshima Johoku High School, expressed his enthusiasm, saying, “Hand in hand with high school students from Nagasaki, we want to move even one step closer to the realization of nuclear abolition.” On March 31, too, the students will hold an exchange and discuss their future activities.