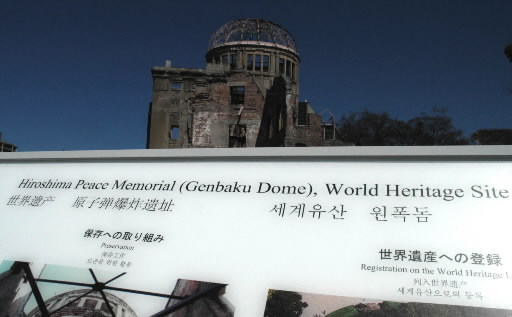 The Hiroshima city government has installed a new panel offering explanation of the Atomic Bomb Dome, located in downtown Hiroshima, in the additional languages of Chinese and Korean. Following a rise in the number of Chinese and South Korean visitors who are not proficient in English, explanations in Chinese and Korean were added in response to requests from volunteer interpreters who show visitors around Hiroshima Peace Memorial Park.

The new panel, 1.7 meters long and 2.6 meters wide, has been placed on the south side of the dome. The panel explains that the A-bomb Dome, as originally constructed in 1915, was known as the Hiroshima Prefectural Commercial Exhibition Hall, then later renamed the Hiroshima Prefectural Industrial Promotion Hall. It also conveys how the structure became a symbol of the horror of the atomic bomb after the 1945 bombing, and how it was designated a World Heritage site in 1996. The former explanation panel, which was placed in March 2005, had explanations only in Japanese and English.

Visiting Hiroshima as a tourist with her family, Wei Mei Feng, 52, a housewife from Taiwan, read the explanation carefully and said, “It’s nice to see. I’m sure young people, especially those who aren't good at English, will be pleased.”