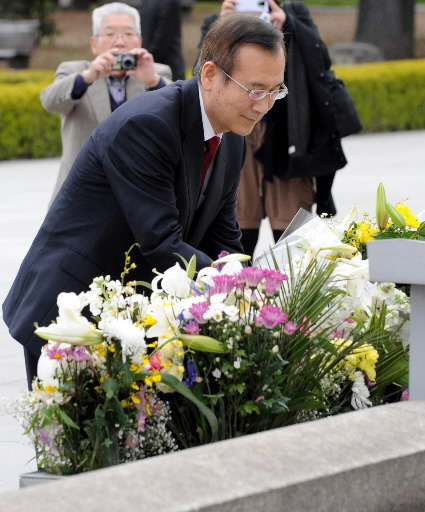 
Made tireless efforts to appeal for nuclear abolition
Tadatoshi Akiba stepped down as mayor of Hiroshima on April 7 after serving three terms in office, a tenure of 12 years. As his last official act as mayor, he paid a visit to Hiroshima Peace Memorial Park and offered a bouquet of flowers to the Cenotaph for the A-bomb Victims.

Before ending his time in office, Mr. Akiba made a final address as mayor to about 300 city employees who had gathered in the auditorium of City Hall. Looking back over the years, he spoke about his accomplishments, including the restructuring of city finances as well as a tenfold increase in the membership of Mayors for Peace. He thanked those in attendance with the words: “It has been an honor having the opportunity to work with you, heart and soul, for the city of Hiroshima and her citizens.”

Mr. Akiba was presented with flowers by his staff in the lobby of City Hall and smiled as he stepped into the car that would bring him to Peace Memorial Park, where he made the offering of flowers at the cenotaph. Supporters that had gathered in the park gave him their thanks and chanted his name: “Akiba!” The mayor replied, “Thanks to your support, I was able to serve 12 years as mayor.”

Mr. Akiba was an associate professor at Tufts University in the U.S. state of Massachusetts and a professor at Hiroshima Shudo University before he was elected a member of Japan's House of Representatives in 1990. In his third term, he left the Social Democratic Party and ran for the office of mayor of Hiroshima in 1999, winning the mayoral election for the first time. Reelected twice, he served three consecutive terms.

As mayor of Hiroshima, Akiba made tireless efforts to appeal to the world for the abolition of nuclear weapons. In August 2010, he received the Ramon Magsaysay Award, considered Asia’s Nobel Peace Prize. At the same time, his proposal to host the Olympic Games in Hiroshima in 2020 did not gain wide support from the public, and his views were often at odds with the city council.

On April 11, he assumes the position of “specially appointed professor” at Hiroshima University.