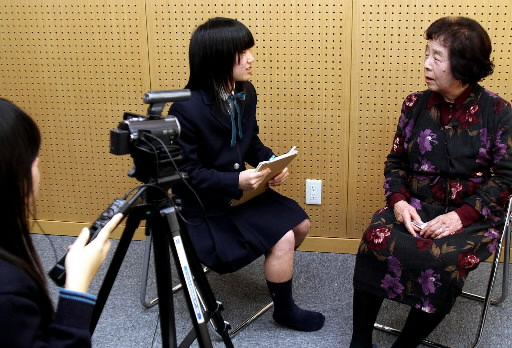 Efforts are being made to launch a new website in July, called “Hiroshima Archive,” which will feature the testimonies of about 100 survivors of the atomic bombing of Hiroshima and the locations where they were exposed to the bomb. Hidenori Watanabe, 36, an associate professor at Tokyo Metropolitan University, is working with students from Hiroshima Jogakuin Senior High School to gather the needed information. By juxtaposing the current views of the city and where these people were at the time of the bombing, the website will seek to provide a vivid picture of the disaster.

The archive will use Google Earth, an Internet mapping service, to show the streets of Hiroshima before the atomic bombing over a map of the city today. The website will also post the survivors’ photographs at the locations where they were exposed to the bomb. With a click, each photograph will link to the individual survivor’s story and message of peace. The archive will make use of the collections of testimonies compiled by the alumini of Hiroshima Jogakuin Senior High School and the information shared by the atomic bomb survivors’ association in Hachioji, Tokyo. Hiroshima Peace Memorial Museum will also provide maps and other information.

In July 2010, to coincide with the 65th anniversary of the atomic bombing, Mr. Watanabe launched the “Nagasaki Archive,” a collection of 100 survivors’ testimonies of the Nagasaki bombing. Megumu Ishido, 53, a lecturer at a technical college in Nishi Ward, Hiroshima, saw the archive and asked Mr. Watanabe if a similar project would be possible to convey the Hiroshima bombing. Mr. Ishido’s students and the students of Hiroshima Jogakuin Senior High School, who volunteered at her request, have joined the project to collect information.

On March 27, about ten 10th graders interviewed Hisako Nomura, 82, a A-bomb survivor who lives in Hatsukaichi, Hiroshima Prefecture, and videotaped her testimony at the high school. She was on a streetcar at Tokaichi, near the hypocenter, but miraculously survived the blast. Before the camera, she recounted her experience, up to the moment she was reunited with her family. She said, “I would like to ask young people to play a key role in telling the world about the catastrophic consequences of nuclear weapons.”

Mr. Watanabe expressed enthusiasm for the project, saying, “I hope the contents of the website will help foster a new generation that will carry on the survivors' stories.”