“Children of the Atomic Bomb” to be screened in New York 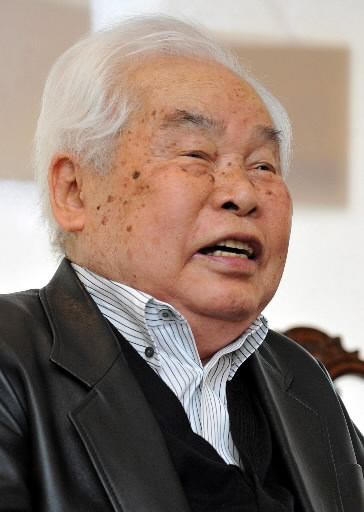 
Director Kaneto Shindo, a Hiroshima native, asks why A-bomb was dropped
“I still bear a grudge against the atomic bombing,” said film director Kaneto Shindo, 98, in an interview with the Chugoku Shimbun held in Tokyo prior to the screening of his film “Children of the Atomic Bomb” in New York. This will be the first time that the film, which was produced 59 years ago, is being screened to the public in the United States. “As a native of Hiroshima, I have always wanted to ask why the bomb was dropped,” Mr. Shindo said. “I hope people will take this occasion to initiate discussion on this subject in the United States.”

The film “Children of the Atomic Bomb” was produced in 1952 by Mr. Shindo, who is originally from Saeki Ward, Hiroshima, with support from many of the city's residents. The film depicts the morning of August 6, 1945, with the ticking of a clock: a baby crawls over tatami mats, people hurry to work, school girls stand in rows before taking part in the dismantling of buildings to create a fire lane in the event of air raids.

“Then came a bomb, a bomb that was no ordinary bomb, a single bomb that killed scores of people. What's more, no warning was even given. The argument has always been that the bombs were dropped to bring about a quicker end to the war, but how well-grounded is this argument?” Mr. Shindo said.

The film will be screened during a retrospective of the director's career held at BAMcinematek in New York starting April 22, the director’s 99th birthday. The project was conceived by actor Benicio del Toro after he became captivated by Mr. Shindo’s classic film “The Naked Island.” Mr. del Toro won a Best Actor Award at the Cannes Film Festival for his performance of revolutionary Ernest Che Guevara, a major figure of the Cuban Revolution. During the retrospective, which will run until May 5, there will be screenings of 11 of Mr. Shindo’s films, including “Children of the Atomic Bomb,” “The Naked Island,” “Onibaba,” “Lucky Dragon No. 5,” and the director’s latest work “Postcard.”

Mr. Shindo met Mr. del Toro when the actor visited Japan last year. During their long conversation, Mr. Shindo, when asked why he made the film “Children of the Atomic Bomb,” answered, “Many people died writhing in agony. As a person who was born in Hiroshima, I consider that unforgivable.”

“I would like people in the United States who have little awareness of the atomic bombing to know what happened in Hiroshima,” Mr. Shindo said. “I hope they will start to discuss the issue after seeing my film.”