Volunteer conveys reality of the atomic bombing in U.S. 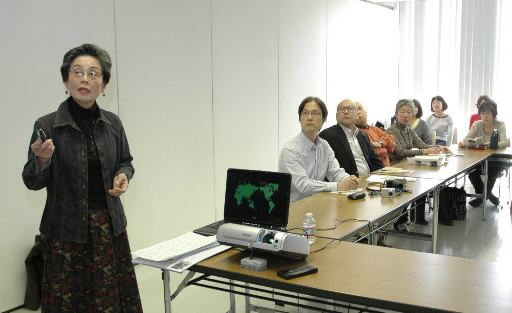 On April 16, Yumie Hirano, 64, a housewife and resident of Hiroshima who took part in the “Never Again Campaign” (NAC), an effort involving volunteers who convey the reality of the atomic bombing while staying at citizens’ homes in the United States, reported on her NAC experience at the International Conference Center Hiroshima in downtown Hiroshima.

Ms. Hirano said that she introduced A-bomb testimonies, showed photos of Hiroshima in the aftermath of the atomic bombing, and spoke about the horror of nuclear weapons at schools in the U.S. state of Texas, where she stayed for about a month from mid-February.

On the day, Ms. Hirano was invited by a group that offered an English tour of Hiroshima Peace Memorial Park and gave a talk to about 20 people. She explained that, in order for children in the United States to be able to deepen their understanding of peace issues, she made such efforts as raising the topic of war and the atomic bombing while introducing the modern history of Japan. Looking back on her experience, she said, “Children who had appeared to have little interest came to wear serious expressions on their faces.”

The Never Again Campaign has been carried out by American and Japanese volunteers since 1985.