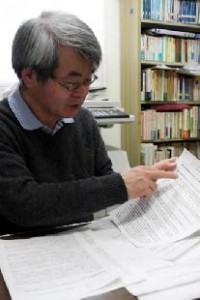 The Junod Society, a citizens’ group in Hiroshima Prefecture, has been receiving email messages from the victims of the nuclear accident at Chernobyl, a disaster that took place during the era of the former Soviet Union. The messages are expressing concern about the health of the victims of the crisis occurring at the Fukushima No. 1 nuclear power plant. The severity of the crisis has been raised to level 7, the same as Chernobyl, on the international scale assessing nuclear accidents.

The Junod Society has received twenty-four email messages from Zemlyaki, an organization composed of sufferers of Chernobyl. Tamara Krasizkaya, the head of the organization, wrote, “Even if your government says there is no danger, please evacuate immediately and save your children.” In her message, she also shared her own experience: “We wiped off our shoes, washed our hands, and cleaned inside the rooms frequently with mops and wet dust cloths. Covering your hair with a hat or a scarf is also important.”

Relating similar experiences as radiation victims, they offer sympathy to the victims in Japan. “More than anyone else in the world, we understand how you feel when your hometowns, where you were born and raised, are deemed off-limits and you are unable to return.” Many of them are giving welcome to the evacuees, saying, for instance, “Here, we could accept one family.”

The Junod Society is forwarding the messages, translated into Japanese, along with relief supplies to the victims in Fukushima. The messages have also been posted on the organization's blog. On April 24, from 1:30 p.m., a meeting will be held at the Fuchu Cultural Center to report on the current situation.

Hitoshi Kai, chairman of the the Junod Society, said, “I would like to convey the messages from Chernobyl and those of Hiroshima and Nagasaki to the people of Fukushima and join hands with them in this crisis.”