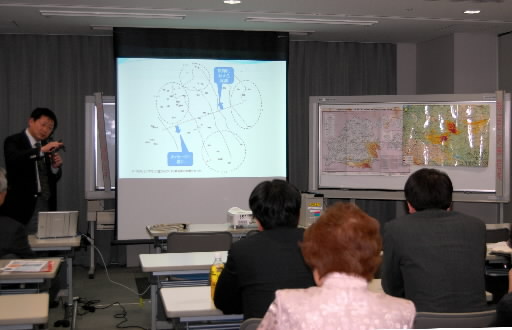 On April 23, a few days prior to the 25th anniversary of the accident at the Chernobyl nuclear power plant, which occurred on April 26, 1986 in the former Soviet Union (today’s Ukraine), a meeting was held at the Hiroshima City Plaza for Town Development through Citizen Exchange in downtown Hiroshima to report on current conditions involving the victims of the Chernobyl accident and look back at the support offered from the A-bombed city of Hiroshima.

The meeting was organized by the Hiroshima Medical Council for Supporting Chernobyl, a citizens’ group represented by Hideo Yamada. Noriyuki Kawano, associate professor at Hiroshima University’s Institute for Peace Science, reported on a survey of Chernobyl victims who had been forced to evacuate from the stricken area when the accident occurred. Mr. Kawano, who interviewed them, said, “There are similarities between the A-bomb survivors in Hiroshima and the victims of the Chernobyl accident. Both groups of people have had concerns about their health for many years and have experienced discrimination at the places of evacuation.”

Masaharu Hoshi, professor at the Research Institute for Radiation Biology and Medicine at Hiroshima University, has studied the radiation levels of the soil near the Chernobyl power plant and related issues. He said, “Detailed maps that show the radiation contamination must be made for the accident at the Fukushima No. 1 nuclear power plant, too, to help devise effective countermeasures.” Mr. Yamada reported on the many years of activities to provide medical support to the victims of Chernobyl and the reality of the people who have continued to live in the contaminated area since the accident.