Fukushima and Hiroshima: 8 A-bomb survivors were living nearby the nuclear plant when the accident occurred 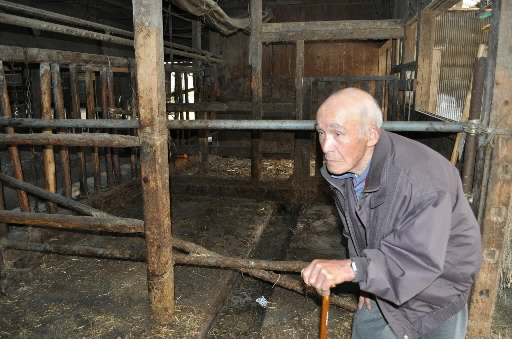 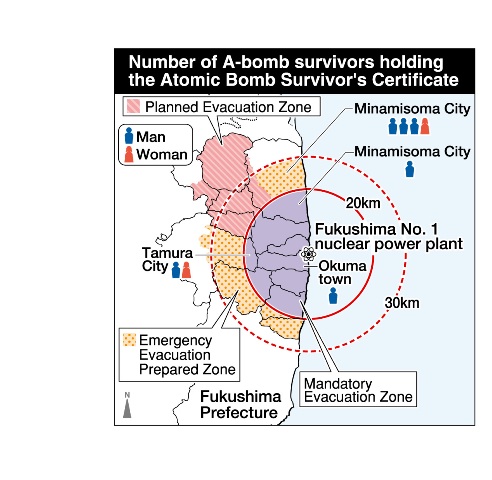 by Seiji Shitakubo and Yo Kono, Staff Writers


Horror of radiation revisits the survivors, now anxious about losing their homes and livelihoods
Fukushima Prefecture and the Fukushima Prefectural Confederation of A-bomb Sufferers Organizations have conducted an investigation and found that eight A-bomb survivors of the Hiroshima and Nagasaki bombings were living within 30 kilometers of the Fukushima No. 1 nuclear power plant when the accident occurred in the wake of the Great Eastern Japan Earthquake. First exposed to the radiation released by the atomic bombings 66 years ago, they are once again facing the horror of radiation, as it continues to leak from the power plant. They are anxious, too, about losing their homes and livelihoods.

According to the Confederation, 93 residents in Fukushima Prefecture hold the Atomic Bomb Survivor’s Certificate (as of May 5). Among them, eight people (six men and two women) live within 30 kilometers of the power plant. Four of them were survivors of Hiroshima, and four of Nagasaki.

Among the eight A-bomb survivors, four live in the legally-binding off-limit zone, or “caution zone,” within the 20-kilometer radius from the nuclear power plant: one in Okuma Town, two in Tamura City, and one in Minamisoma City. One of them, a woman who lives in Tamura, is apparently still residing in her home, while the others are reported to have evacuated to such sites as the homes of acquaintances in Akita Prefecture and Kanagawa Prefecture.

Four other A-bomb survivors live in the 20 to 30-kilometer zone which has been designated the “emergency evacuation preparation zone.” According to registration information, their residences are all located in Minamisoma. As of May 5, two were remaining at their homes, one had evacuated to a friend's home, and the whereabouts of another were unknown.

One of these A-bomb survivors, Minoru Oka, 85, who lives in Kashima Ward, Minamisoma, located 28 kilometers from the power plant, also suffered the power blackout and water disruption caused by the earthquake. Together with his five family members, he moved from one place to another, staying at relatives' homes in Fukushima Prefecture and Yamagata Prefecture as well as at hotels and evacuation centers. In early April he returned to his home in Minamisoma.

Mr. Oka was exposed to the atomic bombing of Hiroshima in today's Minami Ward while at the barracks of the former Army Ship Communications Reserve (so-called Akatsuki 16710 Corps). About two months later, he returned home to Minamisoma. Since then, for over 60 years, he had made his living running a dairy farm.

Due to the accident at the nuclear power plant, however, the shipping of raw milk has been suspended. As a consequence of the disruption in electricity and water, he was forced to sell all 46 of his cows. Four years ago, he suffered from stomach cancer and underwent surgery. “Radiation has no smell or color,” he said from his empty cattle barn. “The atomic bomb exploded with a tremendous noise, but this time, radiation is leaking silently, little by little, from the power plant.” He added with indignation: “It's a very frightening thing.”

Atsushi Hoshino, 83, secretary general of the Fukushima Prefectural Confederation of A-bomb Sufferers Organizations and an A-bomb survivor of Hiroshima himself, lives in the city of Fukushima. He said, “Adequate care is vital if the residents suffer damaging effects to their health,” and called for support based on his own experience of having suffered rectal cancer and other late effects of the atomic bombing.

The nuclear power plant was intended for the “peaceful use of nuclear energy,” but radiation continues to leak from the facility. The environmental impact will have to be dealt with for at least the next several decades. How can the 66 years of Hiroshima’s experience in medical care for A-bomb survivors, soil studies, and other expertise be utilized for Fukushima? The Chugoku Shimbun will continue to examine these questions in our reporting from Fukushima.