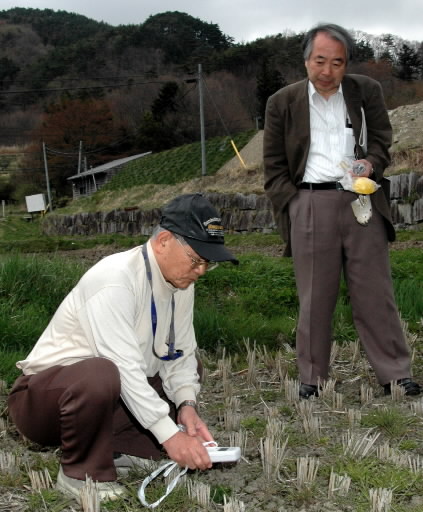 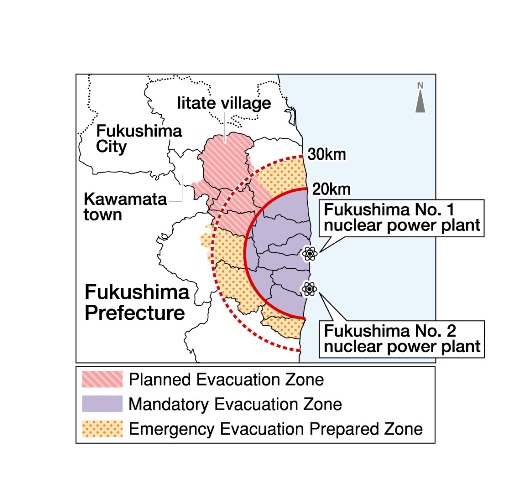 
Two doctors, former researchers at the Research Institute for Radiation Biology and Medicine, investigate radiation contamination
Two doctors with many years of experience engaged in the medical care of A-bomb survivors have begun an investigation into the radiation contamination wrought by the Fukushima No. 1 nuclear plant. Their aim is to make proposals, based on their expertise of Hiroshima, specifying actions that should now be undertaken to combat the problem. “The government, as well as the local residents, must take every precaution so that internal exposure to radiation can be avoided,” they say.

The two doctors are Nanao Kamada, 74, chairman of the Hiroshima A-bomb Survivors Relief Foundation, and Osamu Saito, 63, a physician at Watari Hospital in the city of Fukushima. Dr. Kamada was Dr. Saito’s supervisor when they worked as researchers at Hiroshima University’s Research Institute for Radiation Biology and Medicine (RIRBM). With these professional ties, Dr. Kamada proposed to Dr. Saito that they conduct a joint investigation.

During their investigation, the two paid particular attention to rainwater pipes, as radiation-contaminated rainwater is collected in gutters and drains through the pipes to the ground. In the “planned evacuation zone” in the towns of Iitate and Kawamata, the doctors measured the radiation doses of rainwater pipes at five private homes, each at one meter above the ground, which is the same standard used by the national government, as well as at 10 centimeters above the ground, their own chosen measurement.

Dr. Kamada is convinced that the risk in Fukushima is similar to that of the residual radiation in Hiroshima, which affected those who entered the vicinity of the hypocenter in the immediate aftermath of the atomic bombing to look for family members or other loved ones. He calls for urgent action to be taken in order to prevent internal exposure.

The biological half-life of cesium-137 and that of iodine-131 are about 100 days. This means that, with regard to radioactive nuclei that have leaked from the nuclear power plant and been taken into the body, it takes about 100 days for half of the amount to be removed from the body by natural elimination such as urination. Examining urine is said to be effective in providing objective evidence to confirm a person's dose of internal exposure. “We would like to ask the residents for their understanding and cooperation in carrying out urine examinations,” Dr. Saito said.

Internal exposure
Internal exposure is exposure to radioactive materials absorbed in the body by inhaling or ingesting them, or through injured parts of the body. Until these materials are eliminated from the body through urination or other ways, they continue irradiating the surrounding regions, a carcinogenic effect. Different radioactive materials accumulate in different tissues and organs. For example, iodine-131 accumulates in the thyroid gland, and cesium-137 tends to accumulate in the muscles and other parts of the body.