Fukushima and Hiroshima: Health of 150,000 residents near nuclear plant to be followed over 30 years 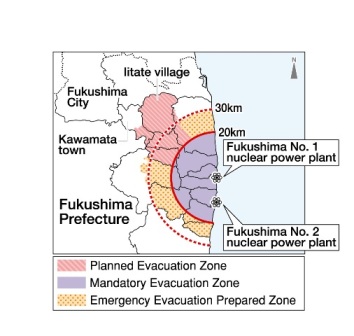 by Seiji Shitakubo, Yoko Yamamoto, and Yo Kono, Staff Writers

On May 9, it was learned that Fukushima Prefecture and Fukushima Medical University have agreed to follow the health of about 150,000 residents near the Fukushima No. 1 nuclear power plant for at least the next 30 years. This monitoring will be made with the support of Hiroshima University, Nagasaki University, the Radiation Effects Research Foundation (RERF in Minami Ward, Hiroshima) and other institutes. This weekend the relevant parties will meet in the city of Fukushima to discuss the details.

According to several sources, Hiroshima University, Nagasaki University, RERF, and the National Institute of Radiological Sciences in the city of Chiba will provide their expertise in conducting surveys, and the activities will be based at Fukushima Medical University.

The target areas include those within 30 kilometers of the nuclear power plant as well as those in which high levels of radiation are detected in the air. All residents of these areas will be monitored over the long term. In addition to periodical health examinations, which will be the main undertaking, an effort will be made to seek information on people's living conditions following the accident. The project is to be launched at the earliest possible date because follow-up surveys may become increasingly difficult as people move out of these areas.

In Hiroshima and Nagasaki, the Atomic Bomb Casualty Commission (ABCC), established by the United States in 1947, began conducting health examinations of the A-bomb survivors. These activities were succeeded by RERF in 1975. The follow-up surveys of about 120,000 A-bomb survivors show that the incidence of cancer, including leukemia, has a correlation to the dose of radiation exposure.

In regard to the merits of monitoring such a large population, an expert who will take part in the health management effort explains, “Early detection contributes to successful treatment. In addition, if they are suffering from cancer or other diseases in the future, the surveys will aid them by providing scientific evidence to confirm the cause.”

Questions involving how support will be obtained from the residents and how their personal information will be protected remain to be addressed.