Fukushima and Hiroshima: Physical examinations to be given to those working within 30 kilometers of troubled nuclear plant 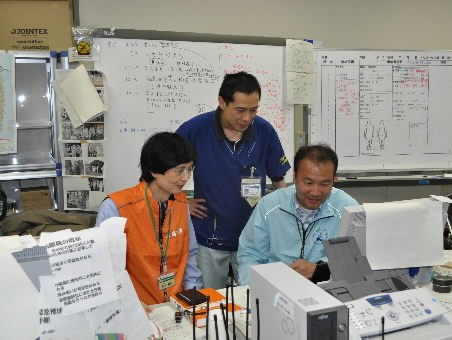 Fukushima Medical University will begin providing physical examinations for those who have been working within 30 kilometers of the troubled Fukushima No. 1 nuclear power plant, including police officers, firefighters, and members of the Self-Defense Forces. The examinations will be conducted at the University Hospital. Hiroshima University and Nagasaki University will join in this effort, utilizing their medical expertise on treating A-bomb survivors. The medical team will measure the doses of radiation exposure experienced by this population and offer mental support to ease their anxiety about having been exposed to radiation.

As a “secondary radiation emergency medical institution,” Fukushima Medical University has been examining the workers at the nuclear power plant, who have been exposed to high levels of radiation. At the same time, there is an emerging issue concerning the health of the police officers, firefighters, and others working in the areas where high levels of radiation have been detected, including the “caution zone” (off-limit zone) and the “planned evacuation zone.” Under these circumstances, Fukushima Prefecture has asked the university to begin examining these people.

The medical team will use, if needed, whole-body counters to measure any internal exposure. Masafumi Abe, vice president of Fukushima Medical University, said with earnest, “We must alleviate their anxiety about radiation exposure.” Hiroshima University has been maintaining a physician in Fukushima to support the efforts of evaluating radiation doses and providing guidance.

About 10 people are expected to be examined on the first day. The medical team will also address the emergency medical care of the local people who temporarily returned home in the caution zone. Hitoshi Yokoyama, deputy director of Fukushima Medical University Hospital, said, “Based on their expertise, we would like Hiroshima University and Nagasaki University to lend us their support so we can provide a range of medical care.”