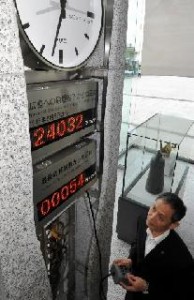 On May 24, Hiroshima Peace Memorial Museum, after learning that the United States conducted nuclear experiments on November 18 of last year and March 31 of this year, reset the clock called “Peace Watch Tower,” which displays the number of days since the world’s last nuclear test. The clock stands in the lobby of the museum's east wing. Koichiro Maeda, director of the museum, reset the number on the clock's digital display from “251” to “54.”

The clock was reset for the first time since the U.S. subcritical nuclear test on September 15 of last year became known almost a month later on October 13. This is the 14th time that the clock has been reset since it was installed in August of 2001. Mr. Maeda expressed indignation with the nuclear tests, saying, “The tests can be understood as a demonstration of the U.S. intention to maintain nuclear weapons. It's very regrettable.”

The Peace Watch Tower has played a role in protesting nuclear testing and giving pause to further nuclear experiments. The clock also displays the figure “24,032,” the number of days, as of May 24, 2011, since the atomic bomb was dropped on Hiroshima.