Dr. Marcel Junod is honored at ceremony marking the 50th anniversary of his death 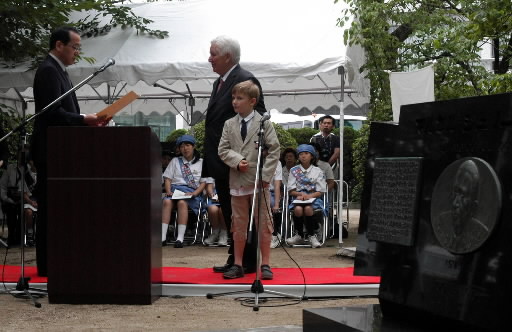 On June 19, a ceremony took place to honor Dr. Marcel Junod (1904-1961), the Swiss doctor who brought 15 tons of medical supplies into Hiroshima in the aftermath of the atomic bombing and personally treated A-bomb survivors. The ceremony, marking the 50th anniversary of Dr. Junod's death, was held at the monument dedicated to him, located in Hiroshima Peace Memorial Park. Hiroshima Mayor Kazumi Matsui attended the ceremony and presented a certificate of appreciation to his family, who were visiting from Switzerland. It was the first time a Hiroshima mayor has attended a ceremony honoring Dr. Junod.

An organizing committee comprised of the Hiroshima Prefectural Medical Association, the Hiroshima branch of the Japanese Red Cross Society (JRCS), and other entities has been holding a memorial ceremony for Dr. Junod every year for 22 years. Roughly 300 people attended the ceremony, including Mr. Matsui; Tadateru Konoe, the president of JRCS; and Urs Bucher, Ambassador Extraordinary and Plenipotentiary of Switzerland to Japan.

Praising the achievements of Dr. Junod, who gave hope to many A-bomb survivors and encouraged them to go on living, Mr. Matsui handed a certificate of appreciation to Benoît Junod, 65, and Maximilian, 7, Dr. Junod’s eldest son and grandson, respectively. Benoît Junod said in his remarks that while nuclear disarmament, which his father appealed for, has made little progress, developed countries have come to depend on nuclear energy (including nuclear power generation) and that the accident in Fukushima is a warning to all of humanity with regard to nuclear dangers.

Dr. Junod, head of the Japan delegation of the International Committee of the Red Cross, arrived in Japan on August 9, 1945, with the objective of assisting the POWs of the United States and other allied nations in their return home. When Dr. Junod learned about the devastation that had befallen the A-bombed city, he made additional efforts to provide medical support, which was not his primary duty. Among the medical supplies he brought to Hiroshima was penicillin, a precious item for the Japanese people. After returning home in 1946, Dr. Junod spoke out against the inhumanity of atomic bombs and made many appeals for peace.